This Memorial Day, I’m remembering not just my uncle, Lt. Frank Ebner Gartz, WWII B-17 navigator, but the memories of his service (300+ WWII letters to and from him, 1943-1945). Last week I donated those letters, along with 50+ bankers’ boxes of memories, our family archives, to the Newberry Library. Here’s how it came about.

My Mom died on August 12, 1994, after battling peritoneal/ovarian cancer for more than a year. My brothers came in from Seattle with their families, and so we could celebrate Mom’s life and mourn her death. 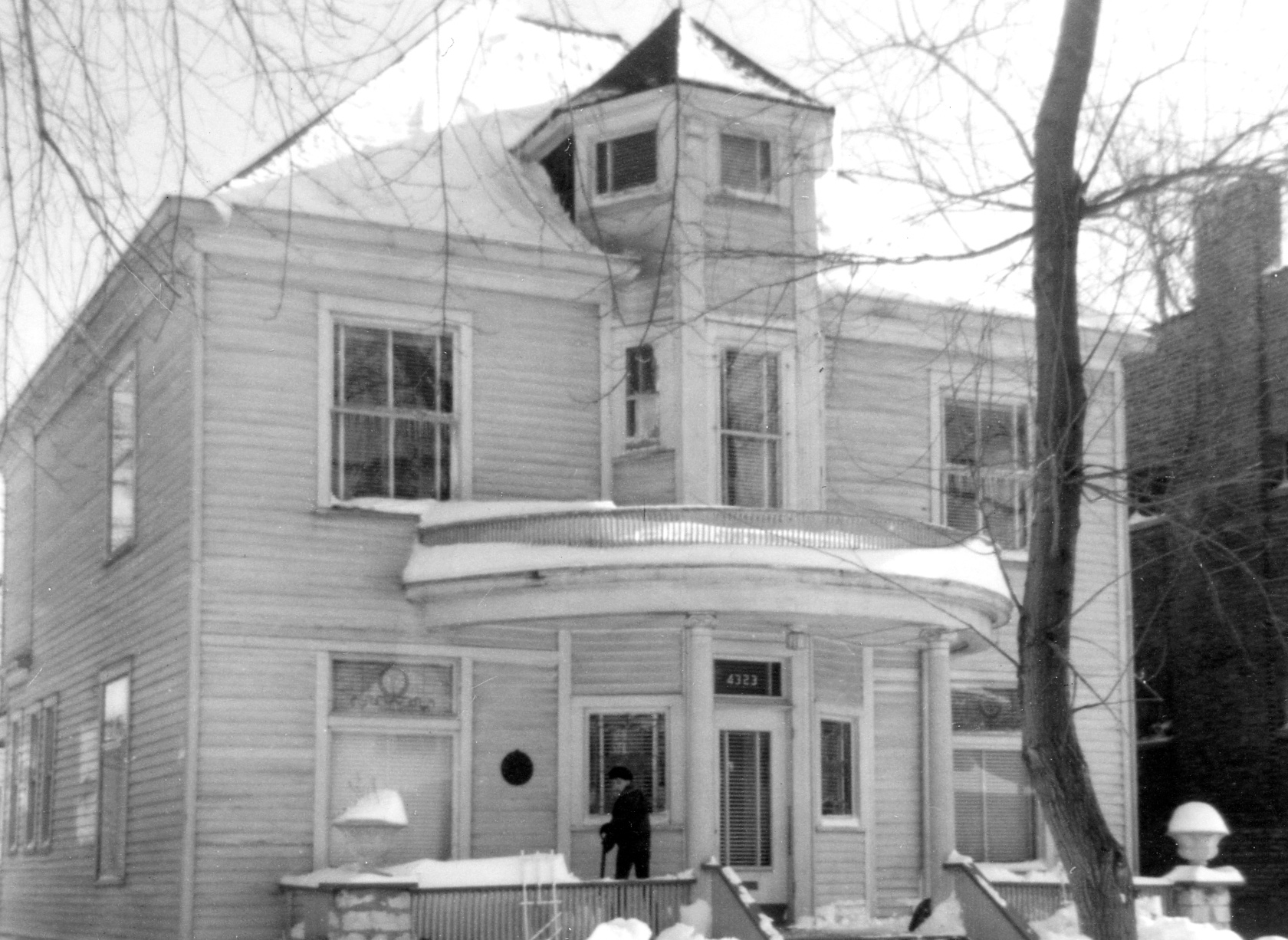 4323 N. Keeler, our treasured home where we found hundreds of historical family archives: letters, diaries, photos, documents, and much more.

A few weeks later, my brothers returned so that we could work together to clear out the most wonderful house we had known at 4323 N. Keeler, a gem of a Victorian we had all worked together to renovate after purchasing it in 1965. Now our job was to separate the trash from treasure as we readied the house for sale. Little did I know how that common event in the passing of one generation would lead me down a path I had never considered nor dreamed of.

In my parents’ attic we discovered thousands of pages of letters, diaries, documents, photos, and so much more, spanning virtually the entire twentieth century. We divided the contents into twenty-five bankers’ boxes, which came to be stored in my garage as I got on with the business of raising my two young boys. 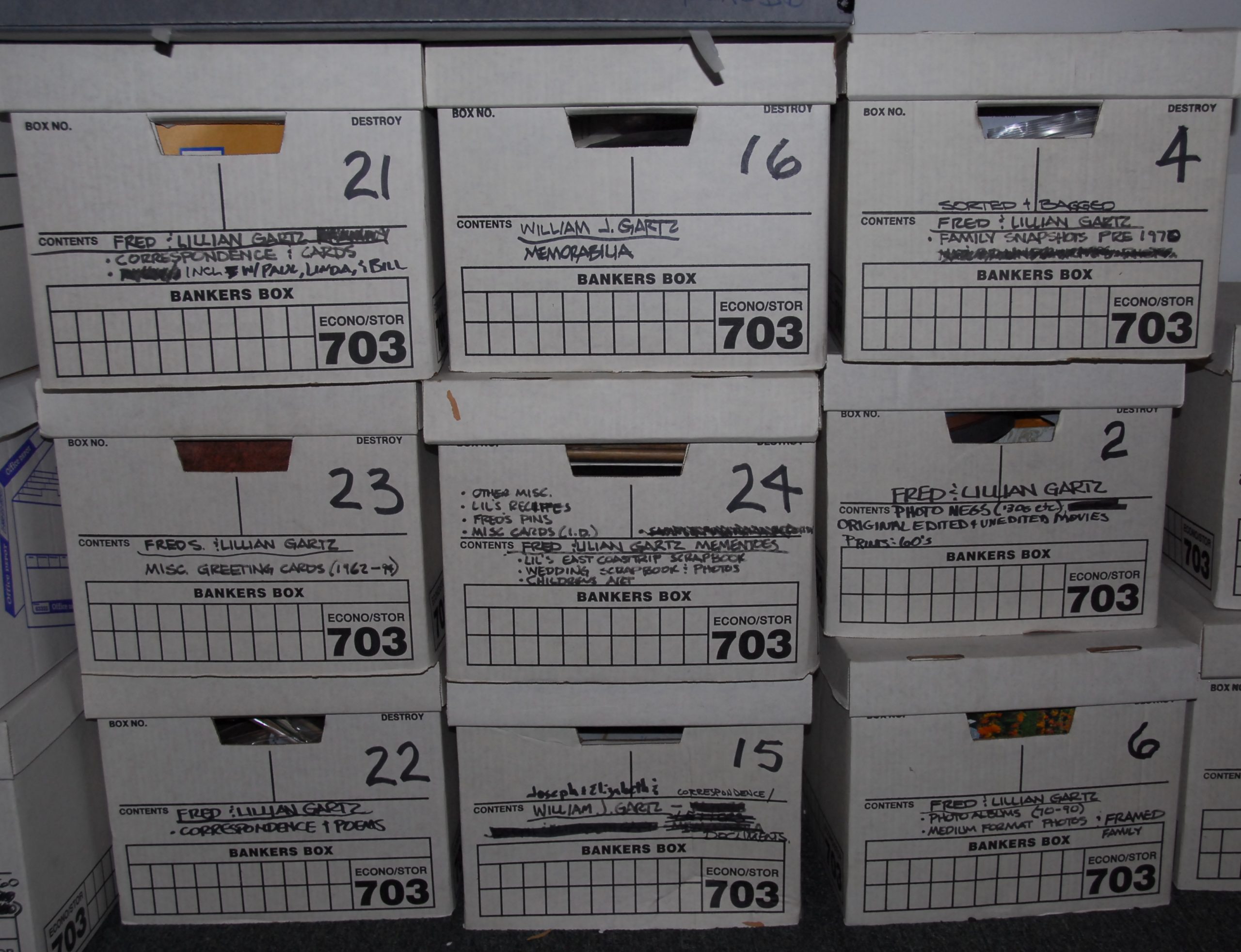 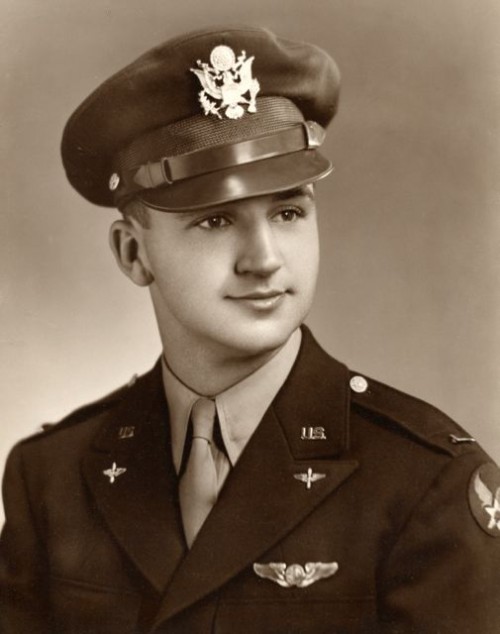 About 2002, curiosity got the better of me, and I started hauling out the boxes, one by one, starting with World War II letters to and from my uncle, Frank Ebner Gartz. Those letters whisked me to the past, to the everyday lives of my parents, grandparents, and the community of our family church, Bethel Evangelical Lutheran, as all banded together to keep up the spirits of their boys in uniform (Bethel alone had more than ninety young men in the service). 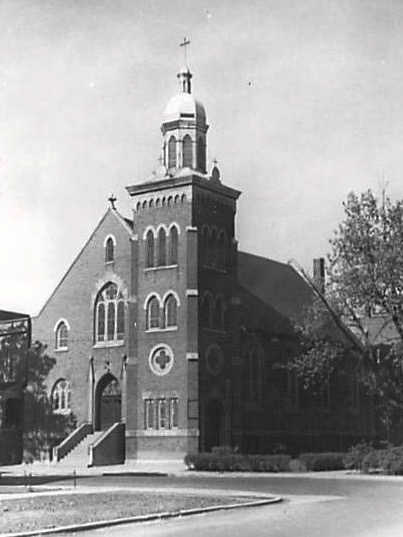 Bethel was a hub of our West Garfield Park community from the 1920s onward; Keeler and West End Avenues.

They also revealed the training, tribulations, and triumphs of my uncle, Frank Ebner (ABE-ner) Gartz, as he transformed from an eighteen-year-old West Side boy into a seasoned airman, a navigator responsible for plotting his crew’s path to and from their Second Bomb Group base in Amendola, Italy, to dangerous missions across Axis-controlled Europe, dodging FLAK so thick, “it looked like a carpet you could walk on,” wrote my uncle.

I was hooked. I took out more boxes: my mother’s letters of falling in love with my dad; thirteen years of letters between them as my dad traveled, sometimes gone for seven weeks in the winter, total of six months a year. Mom’s diaries started at the age of ten (1927), Dad’s diaries from age 18-21 and his diaries from 1950-1956. And there was so much more.

I knew there was a book in all this somewhere, but where? How? What was the theme? I’d never written a book before and, except for TV documentary scripts, had no real experience writing. I had to learn how to write.

I signed up for classes, workshops, summer writing programs. I voraciously read “How to write a memoir” books and dozens of memoirs, keeping track of advice and great writing.

After years of plowing through the archive contents, researching the Great Migration and racially changing neighborhoods, and writing a sprawling family history (that no one would read), I zeroed in on the issue of redlining, the federal government policy that legally denied mortgages to Blacks and other minorities from 1933–1968, when the Fair Housing Act was finally passed.

My goal was to interweave our family’s history, before, during, and after the racial changes with the history of redlining. It would be a memoir, not an academic book, part history, part family, part my coming-of-age.

During the intervening sixteen years, from 2002, when I had first started reading the letters, and 2018, when my book Redlined was published, I had scoured, researched, and further organized the archives, making fascinating discoveries along the way. 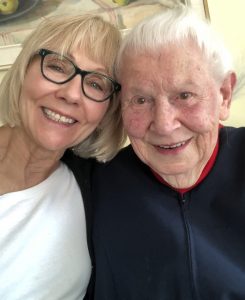 I’d found a ninety-year-old woman, Meta Phleps [now 100!] in Germany, who could read the letters from the old country, written in the now-unreadable handwriting called Sütterlin. She deciphered century-old letters, sent to my grandparents from Siebenbürgen (today Transylvania in Romania) into readable German, and I translated them into English.

As my book neared publication, I started the blog Chicago: A View over Time, relating past and present events to the archives and racial justice themes. 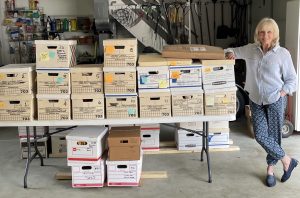 Boxes staged, on first floor of garage  for Newberry, 10 years after acceptance

As I added my family’s and Bill’s family’s history to the archives, and rearranged them for logic and less crowding, they grew to be more than fifty bankers’ boxes.

Sometime around 2010, I realized I needed to find a home for these treasures of Chicago history. I contacted the Newberry Library, and they responded immediately. Then Director of Midwest Manuscripts, Martha Briggs, took a look at the detailed spreadsheet my brothers and I had created, a few diary samples, and said, “We want it all.”

I was elated! By far the best home for these treasures, the Newberry welcomes all over the age of fourteen to do research on-site. What a treasure this library is for Chicago! 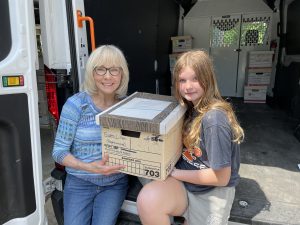 My eleven-year-old neighbor, Maggie, helped me to stage all the boxes on the first floor of the garage to be ready for DONATION DAY: May 24, 2021. We rented a van and Maggie and Bill helped load it with all the boxes. 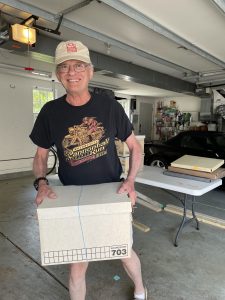 See that wide grin on Bill’s face? He’s so happy to have both garage space, and some of his wife’s time, back! (I’ll find another project!)

We were met at the Newberry by Alison Hinderliter, the new director of Midwest Manuscripts, and her team of Catherine and Emily. We’re all happily vaccinated so we removed our masks for a final photo-op. 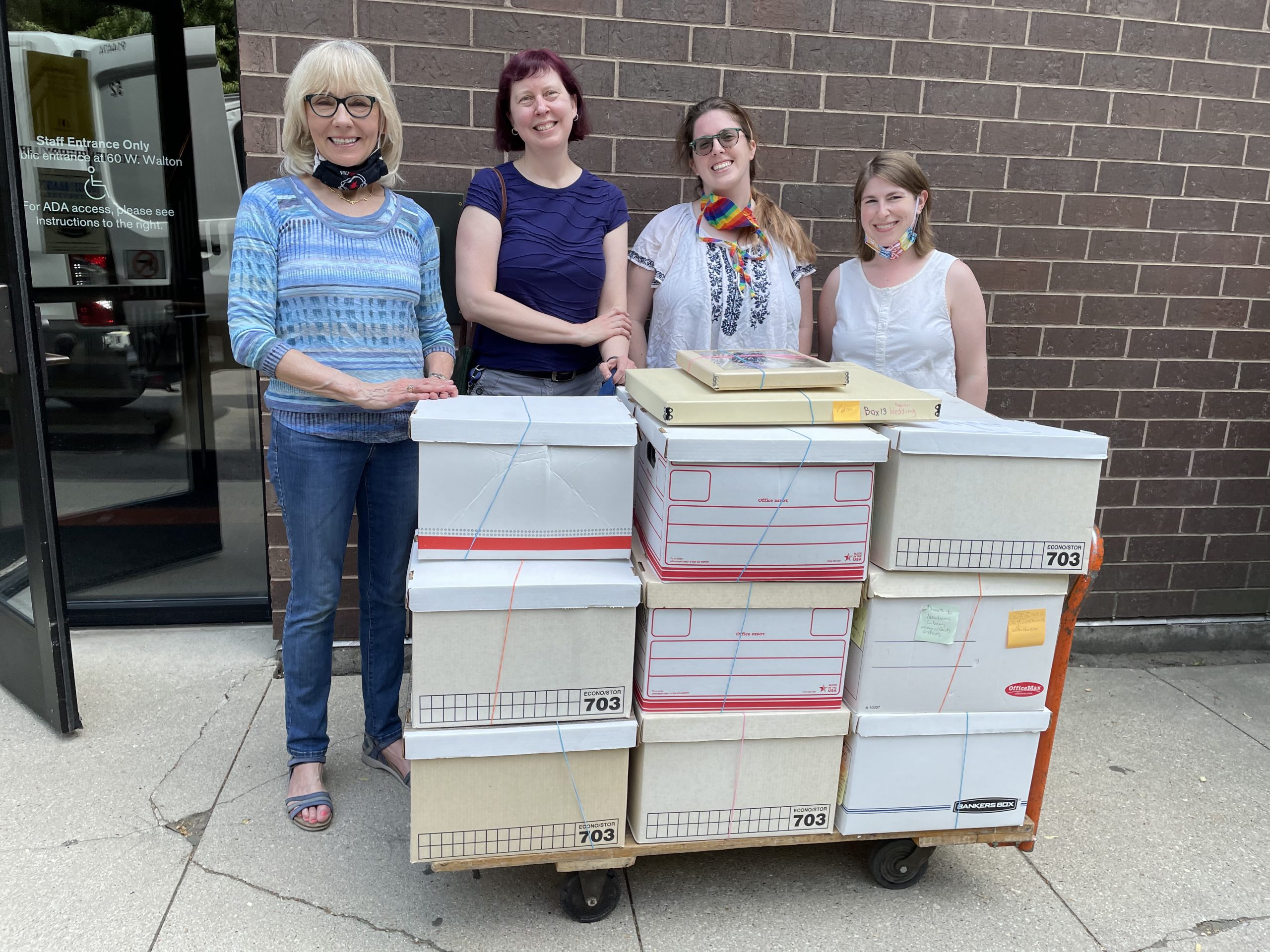 Linda, Alison, Emily, and Catherine loading boxes at the Newberry

But wait! On May 25th there was one more stop for items the Newberry couldn’t take.

The Newberry is unable to handle fabric, so I found another home for my mother’s beautiful, perfectly preserved eggshell satin wedding dress (custom-made for her in 1942), which I chose as my wedding gown as well in 1975. I also donated Mom’s seed pearl tiara that held her (also-donated) veil in place. 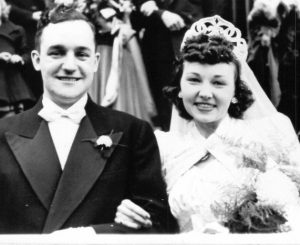 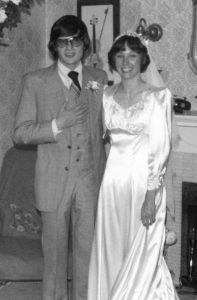 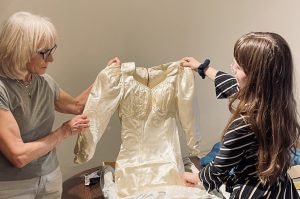 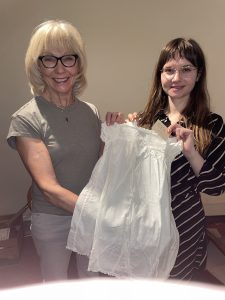 Chicago’s wonderful DANK Haus: German American Cultural Center accepted the wedding dress, as well as my charming hand-embroidered Christening dress from May 22, 1949. (Mom slipped in the date on a small card when she wrapped the dress.) 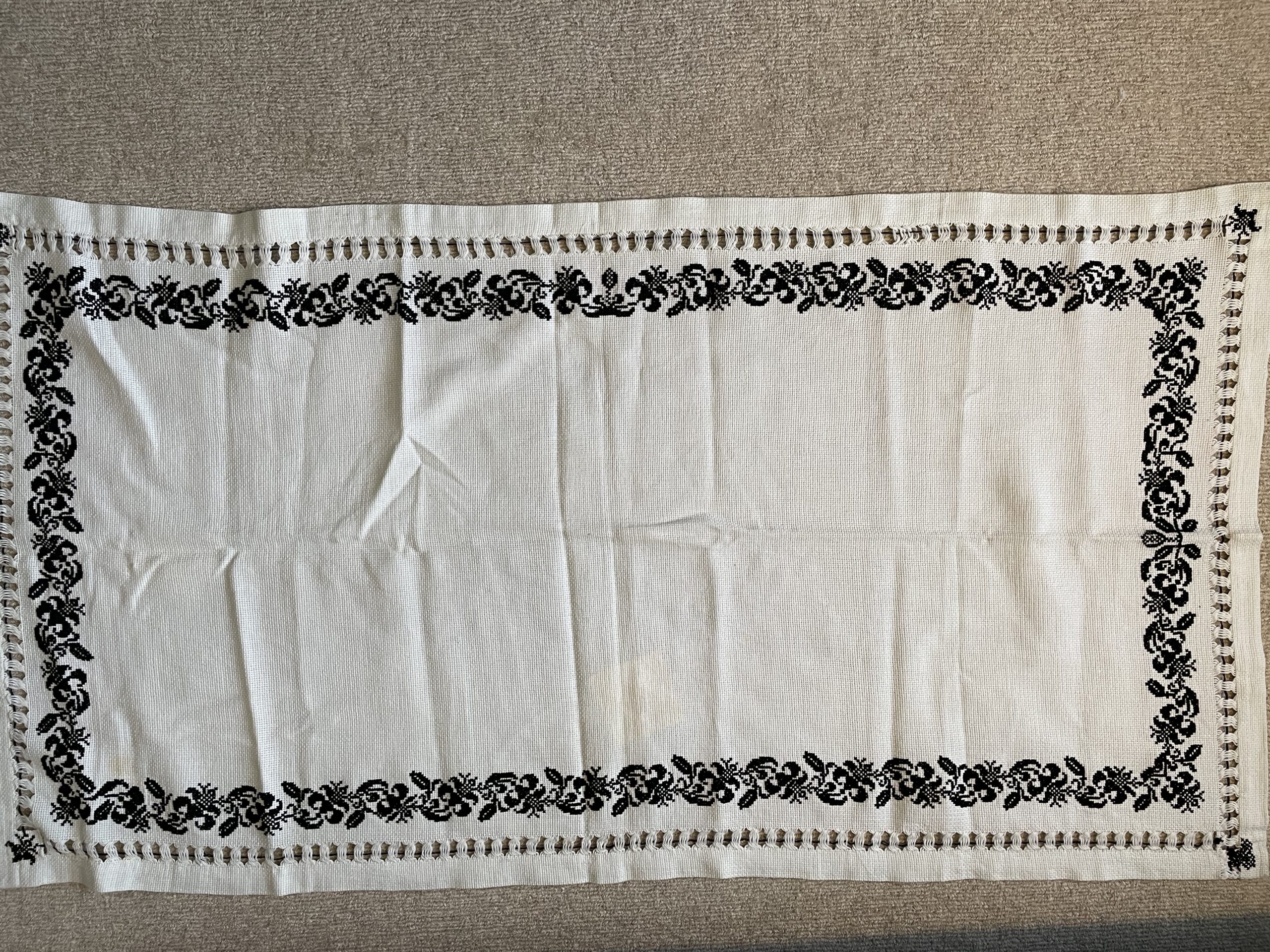 My Grandma Gartz was an equally avid saver of items she treasured, like this table runner she embroidered probably before coming to American in 1911. She, then my parents, are the reason I have her and Grandpa Gartz’s diaries, letters from Romania, Uncle Ebner’s letters, and much more!

This style of embroidery is typical of the Siebenbürgen Germans, and I saw more examples of it when my brothers and I visited Romania in 2007. I donated two examples of Grandma Gartz’s needlework to DANK Haus.

It’s been an incredible journey from the astonishing discovery of how much my parents and grandparents had carefully preserved, almost everything (including photos and slides) labeled, to this final day of joyfully turning over this amazing family history to Chicago’s venerable Newberry Library, which will make sure these treasures are available for research into scores, if not hundreds of possibilities for generations to come. Thank you!

Wonderful and so fitting on Memorial Day!