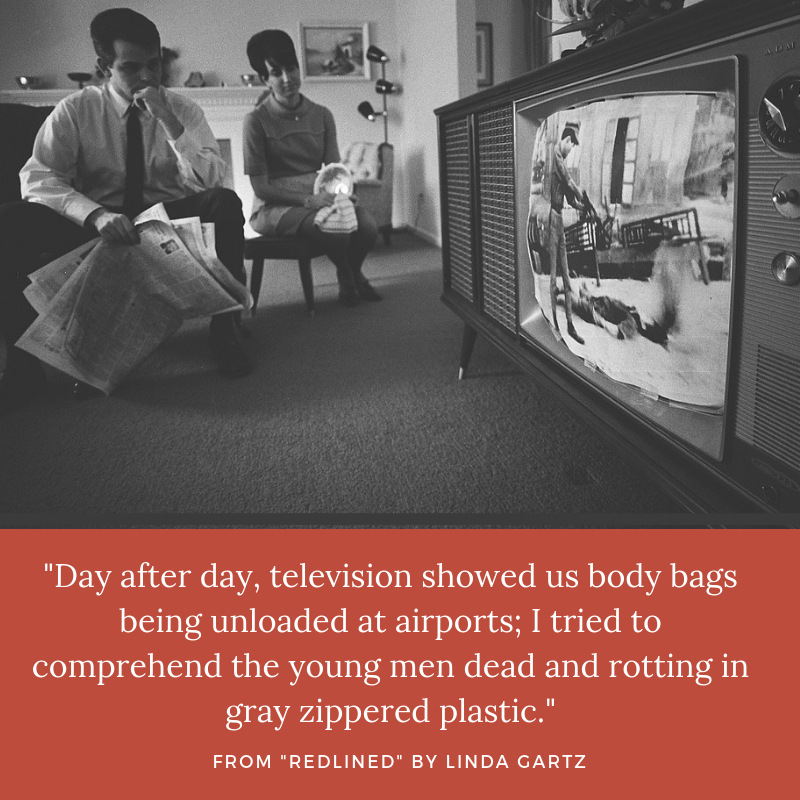 Nightly news programs beamed the Vietnam War right into America’s homes and college dorms across the nation. War was a vague concept I had studied in history class. . . . Now TV gave all Americans an eyewitness view. I saw scared, mud-splattered boys about my own age hunkered down in swamps. Many of these soldiers confessed to interviewers they didn’t know why they were in Southeast Asia.

I watched CBS news reporter Morley Safer broadcasting from a small Vietnamese hamlet that had been burned to the ground by American troops. Children and elderly women, stunned and blank-eyed, wandered like ghosts among the charred ruins. I felt sick at the images—at the thought of my brothers, friends, or Bill moldering in those swamps; killed, blown apart, or tortured in a POW camp.

Day after day, television showed us body bags being unloaded at airports; I tried to comprehend the young men dead and rotting in gray zippered plastic. We saw footage of helicopters—the “whop-whop-whop,” a soundtrack to countless scenes—spraying Agent Orange, defoliating thousands of acres of farmland. We learned only later it had poisoned our own troops.

Meanwhile, our nation’s generals and President Johnson assured us that all was well—we had the enemy on the run and were winning this war. But after the Tet Offensive, well-coordinated North Vietnamese attacks against more than a hundred towns and cities in January of 1968, Americans realized the Communist Viet Cong were far from defeated. We’d been lied to, and a longer war was inevitable. . . .

I watched tens of thousands of young Americans march and demonstrate in antiwar protests across the nation, denouncing the war as immoral. I was not politically astute, and read the conflicting opinions of the “Hawks” and the “Doves,” unsure of what to believe. But the lies and dissembling, the scenes of innocent children and farmers killed, their livelihoods destroyed, drove me into the antiwar camp.

The mood of NU’s campus had flipped since I’d enrolled. When I was a freshman, in the fall of 1966, Greek life was all-powerful. The mostly wealthy population of coeds had dressed for class in expensive skirts and sweaters, even tying color-coordinated bows into their hair. By 1968, dressing up was becoming passé, replaced by a uniform of jeans and T-shirts, better suited to the spreading mood of defiance. Students focused on the war and the civil rights movement instead of sororities and fraternities, a transition still in flux when I pledged.

We questioned everything. In the spring of 1968, women protested the paternalistic curfews governing female students. Northwestern men could come and go from student housing as they pleased, but women had to be in their rooms by eleven o’clock on weekdays and midnight on weekends. Just a couple months after I moved onto campus, NU introduced more gender-equal hours, but only with parental approval for the females. Mom felt the more lenient dorm rules were an “invitation to temptation.”

Since my childhood, Mom had lectured me against premarital sex, adding admonitions like, “Why buy the cow when the milk is free?” I know her intention was good—to protect me from an unwanted pregnancy. Abortion was illegal, and use of birth-control pills (FDA-approved in 1961) was severely restricted. As recently as 1967, it had been a felony in Massachusetts to provide birth control to any unmarried woman.

Dad believed in as much freedom as possible for his kids, so I had to persuade only my mother to sign off on the unrestricted hours, which she finally did. But dorm rules turned out to be the least of my parents’ problems that spring.