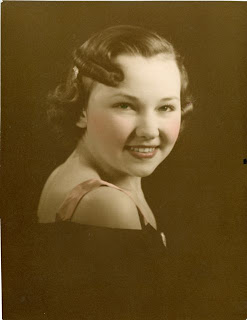 We’ve been following along with Lillian Koroschetz, my mom, as she writes about the joy of falling in love with my dad seventy years ago, in 1941. To start at the beginning of Lil’s diary entries of falling for “Freddie” see Falling in Love 70 Years Ago.

Since her previous entry on September 3rd,  Lil has had to wait almost  three weeks before she heard from Fred again.  What’s wrong with that young man?

I thought I had been deserted by my Freddie and was becoming angry with him. But he called at work today. He wanted to go swimming, but I was afraid to since I had caught a cold after our last date. It had already started the day we went swimming.

So he came to my new address – 2714 Marshfield—and we sang songs and I played piano—I’m practicing again and picking up faster than I have in my life.

Then we walked to the Question Mark Pier where it was “veddy, veddy” dark and embraced each other by our lonesomes.

We waited for a street car quite a while at North Ave. and Ashland. Wow! We just waited an eternity it seemed. Fred gave me his suit coat because I was cold. We were just going to take a taxi when a street car came. I got home at 4:00 and Freddie, I discovered later, got home at 6:00 am. (At the Vine Gardens, several people complimented us on our dancing.)

Lil and Fred’s next date is five days later. Maybe she gave him a “talking to,” but it’s still a day-before invitation. An old boyfriend, Frank, from a year earlier, horns in on Fred’s best girl at a Germania Club dance. Lil handles it, but thinks that maybe a little jealousy is in order!

Freddie phoned me last night for tonite’s date. We went to some “San Verein’s” concert and Dance at the Germania club. Met Frank Schiller, Carl Schodt, and the entire German Club Gang there. Frank danced a number with me and upon returning me to Fred, Frank kept saying, “We ought to see more of each other, etc. etc. And don’t I agree.

I said I was afraid I had to disagree and was rather embarrassed.

But then Freddie could see at least that I could go out with someone else besides him if I so desired. But I don’t so desire.

We did some crazy things tonite like sliding down the bannisters, dancing in the balcony where we had some room—and incidentally, Fred could cool off for a moment or so by removing his coat.

We also fixed up a little fencing they had up there into a square enclosure and danced in there.

Around 3 AM Freddie and I left and walked over to his laboratory which he wanted to show me. So we went through the whole thing and I got so sleepy. We took a taxi home and I promptly snoozed off on Fred’s shoulder. Another wonderful time.

Mom would learn over the years that Fred had no end of “crazy” ideas. He definitely thought “out-of-the box.” But that’s another story.

Love your mom’s ‘do’ and what a smile, Fred should be in a puddle on the floor when she turns that on!

In those days romance was a beautiful adventure of dates and titillating experiences that led a couple to the ultimate conclusion that they were truly in love. My how times have changed–and not for the better!

Hey, Marian — well put! We’ll get there! and Anonymous, nicely put — love as a beautiful adventure. I like that!

I love how energetic they are, spending their wee hours dancing or swimming or waiting for the bus. Who needs sleep when love’s in first bloom?

Linda, congratulations on a year of intriguing and entertaining blog posts. You’ve got us hooked – looking forward to more. Candace

This photo looks like a hollywood headshot. Marian is right…in a puddle indeed!