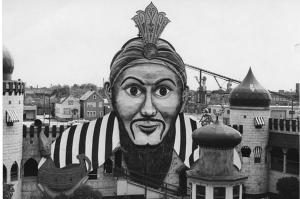 Riverview was a place of carnies and pink spun cotton candy; where the Bobs roller coaster careened around tight curves and plunged down steep tracks so fast that thousands of women’s clip-on earrings tore off–later to be displayed in a huge trunk on the loading platform.

Aladdin’s Castle–with its huge, cartoonish, somewhat sinister rendition of Aladdin, greeted visitors into a creepy “fun-house” that terrified me as a little child. 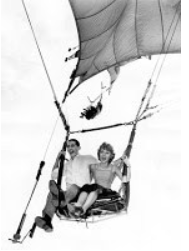 On the Pair-o-chutes, we rose ever…so…slowly…up…up…up…The anticipation was a killer, not knowing when we’d hit the top. When we did, the chutes burst open with a gut-wrenching jolt, and we plummeted, leaving our stomachs somewhere along the way.

But there was a less amusing side to Riverview Amusement Park, one that was a perfect metaphor for racial attitudes common in Chicago, and most of the country, prior to the park’s closing.

It was the Dunk Tank.

The Dunk Tank had various names over the years, and today it’s shocking to think that, for decades, no one (at least not most white people) found them offensive:  “the N—-er Dip, the Darktown Tangos, the Chocolate Drops, the African Dip, and finally the Dip.”

The dunkees were African American men. The dunkers were (almost always) white men. (In the accompanying photo, you can see a black teen or young man pulling back his arm to throw, but not many blacks visited the park). White men were never dunked. 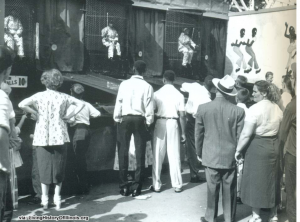 The black men sat on stools within cages, a target over their shoulders. They goaded white men passing by with insults like, “Hey Shortie, I bet you couldn’t hit the side of a barn,” or “Hey Buddy, that’s not the same girl I saw you with yesterday.”

It was understood that the very idea of a black man openly insulting a white man was so infuriating that the white men would buy ball after ball to get even with that “son-of-bitch” (as I heard many yell) and throw, veins popping out of their necks, with all their might at the target. If it was hit, the black man plunged into the water.

But the black men weren’t cowed. They gamely jumped back onto their stools and started in again on the same guy or the next passing white dupe, who, sure enough, bought more balls. Even as a young girl, it was obvious to me that the taunts from the dunk tank were intended to get the white men to keep spending their money. I couldn’t understand why the white guys didn’t get it.

Yet the white men’s over-the-top fury seemed mean (and frightening) to me as a little kid in the 1950s. I could see the racial division: white ball-throwers; blacks in the dunk tanks. I wondered if the black men felt bad (even though they laughed at and kept goading the whites), but I didn’t have a name for the discomfort I felt. I now realize the discomfort I felt came from sensing the racist nature of the game (though I didn’t have a name for it).

In the early ‘60s, a Pulitzer-Prize winning Chicago newspaper columnist, Mike Royko, decried the Dunk Tank as racist in one of his 1964 columns. He wrote the accussation less than a year after the August 1963 March on Washington, where Dr. Martin Luther King had given his “Dream” speech. As the Civil Rights Movement gained steam, many white Americans were beginning to recognize the racism prevalent in just about every area of life, from housing to entertainment. Riverview closed the concession.

Just three years later, Riverview shut down. According to the book, Laugh Your Troubles Away, the main reason the park closed down was economic. When first built, Riverview had been “on the outskirts of the city,” but the park was now right in the center. “The land was worth more than the revenue the park generated, and it was sold.” 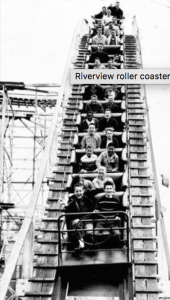 My friends and I have nostalgic memories of the great fun we had at the park as kids in the fifties and sixties. As whites, we moved easily among the rides and concessions, our presence never questioned, blinders firmly in place as to the racism that the Dunk Tank represented.

Share some of your memories, or what your parents may have told you, about racism that was ignored, overlooked, or accepted in the past. What kind of ongoing racism do you see even if more subtle? What work is left to do?

**Quotes from Laugh Your Troubles Away, A Complete History of Riverview Park, Chicago Illinois.  by Derek Gee and Ralph Lopez

Some images from: Living History of Illinois dot com

IT WAS 1957 OR 58, MY UNCLE, COUSIN AND BEST FRIEND WENT RIVERVIEW ON OPENING DAY. AS I WAS TO YOUNG TO OPERATE THE ” BUMP EM” CAR WITHOUT AN ADULT , MY UNCLE RODE AND I BUMPED ” TWO TON BAKER ” PREMATURELY BEFORE HE CALLED FOR ACTION . IT PLAYED FOR MANY YEARS AND WAS MY FIRST TELEVISION APPEARANCE. TWO TON WAS MAD , BUT FUN WAS HAD BY ALL. DESPITE THE ” DIP” , I NOTICED SOME PREDIJUCED TENSION , BUT OVERALL FUN WAS HAD AT RIVERVIEW. I” LL NEVER FORGET. P.S. I WAS WONDERING IF THAT… Read more »

Hi Norman, Thanks for the memories. Yes, we all have a lot of fun at Riverview. What an interesting story you just told. Do you remember what station 2-ton Baker was on? You could google it, then reach out to the station and ask. It’s an interesting story – for them as well. We didn’t think much about racism back in the day. It just existed-as if a natural part of life. Not so for the many who felt its sting.

Hi Linda, I was doing some research for a memoir I’m writing and came across your post. I was raised in Lincolnwood in the 60s and 70s and don’t think I ever went to that park; but I do remember my mother, who grew up in Chicago, talking about it. She said how humiliating it must have been for a black man to agree to do that, and why people would be sadistic enough to engage in it. It made a big impact on me. Thanks for recording this; I think it’s important. I also wonder if any of the… Read more »

Hi Roberta, Riverview was such an iconic destination of people or our age. Perhaps your mom was upset by the dunk tank and didn’t want you to see it. If you get the book I site at the end of the post, you’ll see that Mike Royko (remember him, columnist for The Sun Times and then The Chicago Tribune) wrote a column decrying the racist nature of the dunk tank. Riverview shut it down. The African American men went to Royko’s office and complained. “We were makin’ good money for just gettin’ wet,” one said, and those honkies couldn’t get… Read more »

A couple of things. I came across your post and clicked immediately since Riverview was a huge treat for us growing up in the 50’s. I don’t believe I ever saw the dunk tank. Maybe my older brothers did, so I’ll ask them. Or maybe I did see it but just figured they were guys doing their job. I really don’t think I would have thought much else. Looking in the rear view mirror I can definitely recognize the segregation that did exist. However honestly, as kids we were clueless. It wasn’t until the 60’s that we really gave it… Read more »

Hi Kathleen. Thanks for reading and for your comment. I do remember the Dunk Tank vividly, because I recall the vein-popping fury the white men had on their bright red faces as they threw the balls to dunk the black guys and the vicious names they called the black men. The N word was in heavy usage along with some other prize names I can’t repeat here. (Of course, the job of the Black men in the tank was to incense the White guys as much as possible). As I mention in the article, yes, the Black men made excellent… Read more »

I came across your post while conducting research for a project. I was not born during the time Riverview was popular; however, I was told stories about how racist the inhabitants of Chicago were during that time. It’s interesting how far the lgbtq community have come while racism has now infiltrated that group and is still very alive today. It actually makes me sad for the future.

Hi Lauren, Thanks for reading and commenting (actually, if you read my response to the previous comment from Kathleen, it includes a lot more information about redlining and the era). I don’t think Chicagoans as a whole are more racist than the residents of many other cities (and it’s not THE most segregated, but one of the most). Virtually all cities in the country were redlined, as the FHA would not back any loans to any buildings (rental or sales) if even a single Black person were allowed in. Yes, I agree that the LGBTQ community quite rapidly were given… Read more »

I was a teenager that went to Riverview in 1966. It was fun and scary at the same time. There were a pack of young teenage afro american kids that were out of control. The place closed down shortly thereafter.

Hi Bill, When I had written a longer reply but WordPress ate it, so I’ll keep this one short. First, thanks so much for reading and commenting. I’m sure that was no fun to feel terrorized at Riverview. Whether those boys were in a gang or just a bunch of testosterone-fueled teens (a necessary component of becoming a gang member or running in packs, though there were some girl gangs too), it obviously frightened you, as it would anyone. If you read my book, you found that my younger brother was punched in the face on Madison Street by a… Read more »