The Cash and Song Book 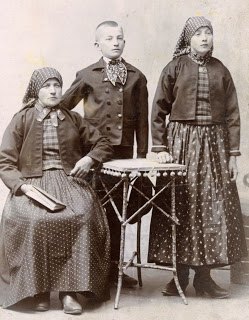 Katarina (Schnell) Gärtz, Josef and his
sister, Katarina. About 1902-03

When we asked my grandfather why he had come to America he always said, “Nothing from nothing makes nothing.”

A little background may illuminate that statement. Like Lisi, he had lost a parent when very young. His father died when Josef was just four. We were told his widowed mother stood in a frigid stream, beating soldiers’ clothes clean with rocks, in order to earn money to raise him and his sister.

Here’s the earliest photo I have of Josef with his mother and sister.

He told us that at age six, he was tied onto the back of horse (his little legs couldn’t reach the stirrups), guiding the beast to plow fields and earn some extra money for the family. He went on to be a carpenter, but based on several notebooks he kept, employment near home must have been scarce as he often had to travel as far as Vienna (about 470 miles away) to find work.

In 1909, at the age of twenty, he started making notes in a small book labeled “Kasse Buch,” literally a “cash book,” to keep track of earnings and expenditures, apparently for a trip to find work, first in Pressburg (the German name for Bratislava), where he spent two weeks, and then to Vienna. But he ends up finding a much more entertaining use for this book, according to Meta, a ninety-year old Siebenbürgen woman, now living in Germany, who took over Uli’s job of deciphering all the unrecognizable writing in my collection.

Born in 1920, Meta learned to write with the old German handwriting, and for more than a year, she has been my abiding Rosetta stone. Her intelligence, skill, and effort have already unlocked secrets trapped in more than forty inscrutable letters, diaries, and notebooks, shining a light on the lives of people whose first-hand experiences would otherwise have been lost forever. Not only has she decoded the writing, but she’s also made connections between events and often interpreted the intent behind the words and phrases that don’t easily translate to English.

I sent Meta a copy of Josef’s Kasse Buch, and she figured out its contents. Josef did some ciphering (calculations are scribbled on the inside of the cover), but despite good intentions, Josef filled almost 50 pages of this “bookkeeping ledger” with the text from well-known folk, children, church and “Fatherland” songs.

My grandparents knew hundreds of songs and often would spontaneously begin singing, in harmony no less. Imagine an era decades before radio existed—never mind television, computers, MP3, I-tunes, podcasts and Ipods. Imagine that all the music that entertained you was self-created. Everyone was his own sort of “American Idol.” How thoroughly we have relegated our own musical creativity to “stars” and “celebrities!” This book, and another he created, are testament to the importance of singing in daily life—and also of my grandfather’s overriding cheerful approach to life.

I’m not certain it was common for young men to write down the words to scores of songs.

In 1910, Josef began a second book, this time the small notebook in which I found his Military Draft notice written on the first page (see Post, “Drafted 100 Years Ago” – November 22, 2010), commanding him to appear before the draft board on September 30, 1910.

How did Josef make use of this second book—and what would his response to his Draft notice be?

I look forward to reading more! 🙂

Thanks so much! Lots of posts this week — more than usual — because of the 100th anniversary of Trip to America!

I am enjoying your blog,but have one question. Forgive me if you have explained this and I missed it, but where did you find and make ocntact with Meta?