A Millennium of Germans in Transylvania

This post was originally published on my blog on February 1, 2011 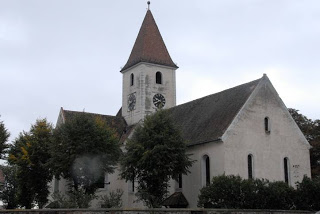 On the second day of our 2007 roots-finding trip in Romania, my brother, Bill, and I met up with Renate, church secretary of the Evangelische Kirche Neppendorf, (the Gärtz family church). Her impressive knowledge of the church’s, Siebenbürgen, and Gärtz family history opened our eyes to the role Germans had played for nearly 1,000 years Transylvania.
Built in the 14th Century, the Evangelische Kirche was originally Catholic, but as the Reformation swept across Europe (Martin Luther’s nailing the ninety-five theses to the church door at Wittenburg in 1517 launched the fight between Protestants and Catholics full force), the residents of Neppendorf, like most Siebenbürgen Germans, chose to become Lutherans. 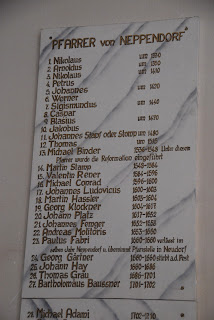 Pastors of the Church from its Catholic roots in 1330

That history is on display the moment one steps into the church. Posted at the entrance is this list of pastors (Pfarrer). The first began his tenure about 1330. Further down, it’s noted that under Pastor Michael Binder, #13, (serving from 1536-1548), this church of ethnic Germans became protestant.

How the Germans came to Transylvania

How was it the Germans first came to Transylvania, eventually numbering as many as 800,000?  After centuries of invasions by various migrating peoples, Transylvania came under the rule of the  Hungarian crown in the 13th century. The Hungarian king at the time, King Geza II, persuaded Germans, primarily from Luxembourg and the Moselle region (near Alsace) to immigrate to Transylvania. He wanted them to defend the southeastern border of the kingdom from regular and brutal invasions by the Tartars. He also knew that the Germans’ industrious nature, mining expertise, and farming know-how could help pump up the economy of his kingdom.
The Germans built cities and churches surrounded by thick walls, behind which locals fled to escape invaders. Hence the region’s German name, Siebenbürgen (Seven Fortresses seems the best translation). The area also became known as “Saxon Land” for its large German population, and is listed so today in tourist guides.

But Renate had more for us than the broad history of the Germans in Transylvania. She presented us with a two-page document of our family’s history in the town of Neppendorf, researched by a previous pastor. It was filled with insights into 18th-19th Century Transylvanian life as filtered through the Gärtz family experience. Next up on “Travel Tuesday.”

This was very interesting for me to read, Linda. I have some German ancestry within my Croatian family tree (they were under the rule of Austria-Hungary for many years within the former Zala County).

I was just reading this morning about the invasion by the Tartars (Tatars) during the 13th century.

Those poor Germans who were sent to act as a barrier against invasion! I guess all of us in the western world owe them and all of the Eastern European peoples a debt of gratitude!

Thanks so much for your comment, Lisa. I couldn’t agree more about “those poor Germans.” How interesting that you were just reading about those Tartar/Tatar invasions!

Wow! That’s just amazing. What a lot of research this all takes. And so much to learn along the way. Your journey is so inspirational!

It’s always great to learn something new and your post “How the Germans came to Transylvania” is very interesting. The strategy of King geza II to persuade Germans to immigrate to Transylvania sounds like a very modern idea. Apart from wanting them to defend the southeastern border from the Tartars and, at the same time knew that the Germans by nature were a win-win situation for the economy of his country. The two-page document of your family history in the town of Neppendorf is a wonderful artifact for your family.