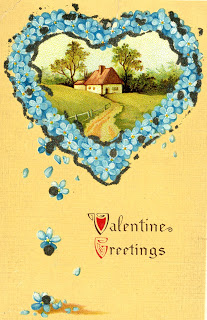 This little Valentine has no date and no signature. So I had put it aside, only to rediscover it just last week! I was able to read the strange writing better after a year of practice, and when I translated the sweet greeting in the first part, I realized it was a century-old Valentine. I scanned it and immediately sent to my “Rosetta Stone”  in Germany to decipher the parts I couldn’t read. Now I’ve got it! I’ve deduced it was included in the January 29th letter that Josef Gartz (my grandfather) wrote to Lisi Ebner (my grandmother), along with Frau Beer’s note. (See  previous post, Love Finds a Way,) because Lisi begins her letter with a response to the Valentine note—as well as a veiled reference to her annoyance with hearing from Frau Beer.
The note on the Valentine reads:

Forget me not
You sweet heart
Greetings and kisses
Farewell. Adieu.

What I write is only for you to read—not for others. No other person should see it. I kiss your hand [also idiomatic, “with pleasure,” a gentile expression of the time.]

Lisi writes back to her Valentine, Sepp (nickname for Josef, like “Joe”) the very next day:

On Saturday at 3:00 pm, February 11th, I received the two letters, the 2nd from E[va].
You write to me that I alone should read your writing. That no other person should see it. I am entirely alone, and will be for the time being. Laughing and talking are in the past.

But now I am joyful and moved to laughter when I read the news from you—“From You” [She emphasizes that she wants to hear from him—not Frau Beer], when I hear that it goes well for you. Just recently I had lost courage and my mind went back and forth because I always heard that it was going poorly [in America] for all of you. I also received a letter from my sister on February 7th in which she told me that that there was no more work and that she would come back here. [Lisi’s stepsister, Maria had gone to America before Josef did and also helped him settle in.]

But oh how I smiled when I heard…how satisfied and happy you are. What joy I felt!
Today I was at home where I occupied myself with thoughts of you, rested and didn’t do a lot. I fantasized about your letter, how you explained your trip, and I wondered if it’s only a short time until my path is free [to come to you?] Now I just don’t know what I should do.

It’s clear to me and eases my mind that our dear God turns our destiny, at times giving us sadness and heavy burdens, but then again makes the sun shine. I believe that more opportunities arise over there [America] and it would be better than here. Also our dear God gives you the chance to reach your desires.

I thought to myself that you would stay there one year (or two years at the most). Perhaps you would have enough earnings that you would come and get me. Then I would leave immediately and have no fear at all, no lack of courage, because I would leave with [you and] your protection. How I would go there myself I don’t know.

The signature is missing, but my guess is it was  signed “with Greetings and Kisses.”

I can imagine Lisi’s trepidation at the idea of undertaking the arduous, frightening journey to America alone. She hopes Josef will come to get her after a year or two. Naturally, she would feel safer traveling with him. But he had already left his home town once without proper papers, and knowing his impatient and determined nature, he won’t want to wait a year or two for his love to join him. I’ll be sharing future postcards and letters, each of which contains an amazing discovery or coincidence, and foreshadows their future together.

What a sweet love story is told through these letters, Linda! It is such a wonderful insight into what so many of our ancestors must have been going through as they contemplated and then proceeded with immigration to America a century ago.

I too love this, the real feelings behind such an undertaking/move. Can’t wait to read future installments.

Linda, I’ve been trying to comment for several days, but my computer didn’t approve. So, while my computer is cooperating . . .
Recently, I purchased some old genealogy magazines at our local library book sale. There were a few Everton’s and 3 or 4 old Ancestry magazines. Then last weekend, I finally pulled out one and starting skimming through. My attention was drawn to a yummy photo of a recipe – Kaiserschmarren. What a lovely surprise to find your name as the author. Thank you 2 1/2 years later.

How much fun is that–to have found that article! We never know what serendipity this online community will create!

This post and the previous one are just wonderful. What incredible insight into their lives and what it was like for those contemplating journeying to America. Great stuff.

Sometimes I feel like a voyeur, but it’s all like a time machine – taking me into Josef & Lisi’s minds and hearts! Thank you for your comment.

Thank you for visiting my blog Linda, although I must admit I am a bit intimidated after reading the quality of your posts! Reading your blog is a sincere pleasure and inspiration.

Never be intimidated! I often feel woefully inadequate in the genealogy research department when I see the hard, disciplined work so many of our fellow bloggers do. But I have to follow my main interests and stories in a way that makes sense for me. The main thing is we’re each sharing our fascination with family and history through these blogs and have a community that can check in and say “way to go” now and then. Thanks for stopping by.

Thank you for leaving a comment on my blog Linda. You have so many accomplishments! I noticed you have some interest in Costa Rica. I will have to read this as my husband was born there and still has family there. I am anxious to read what you have!