Channeling the Dead to Life 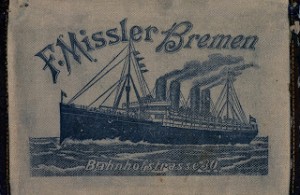 Missler Wallet with Josef’s Gärtz’s diary inside. Note: “Missler” was a ticket agent in Bremen, Germany, but for years people thought it was the name of this “ghostship.” Scroll down to the “Missler” link to learn more.

This piece is a repost, originally published on the blog on  December 23, 2010, a day before the 100th anniversary of Josef’s departure for America.

I sometimes feel like a medium—you know—those people able to communicate with the dead. But in my case, they are speaking to me, and I’m channeling them back to life from across the last century.

One of the most astounding discoveries I made just recently was Josef Gärtz’s diary of his trip to America. Several times I had seen the small, brown canvas Missler wallet inside of which my grandmother had written, “Dad’s Pass,” meaning his passport. But inside was no passport–just printed pages in Hungarian and some strange writing in the back. I have so many documents, photos, and artifacts (twenty-five banker boxes full) that even after I’ve gone through them, I can come back to a box later and discover some small detail I had overlooked. 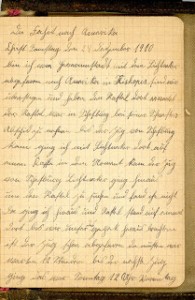 The reason I think I noticed the diary this time around (just a few months ago) was because I was becoming more familiar with the ancient handwriting, able to recognize more letters and words. On this page in the back of the “passport” wallet, I easily picked out “Amerika” and 1910. (see it to the right) That was promising! Looking more closely I realized he had written “Die Fahrt nach Amerika.”

My heart soared. “The Trip to America!” What else could it be but a diary of his journey! Even if I weren’t related to the author, I’d love to read a century-old diary of a young immigrant in order to discover what a he experienced on that risky, bold trip. I sent off a copy to Meta, and within a few weeks, Josef told me about his adventure in his own voice.
Combined with the discovery of a letter and two postcards that he wrote to Lisi along the way, we can hear the fear, sorrow, and excitement that accompanied a twenty-one-year old about to leave behind everything familiar to strike out for an unknown future with only his optimism and confidence to carry him through. 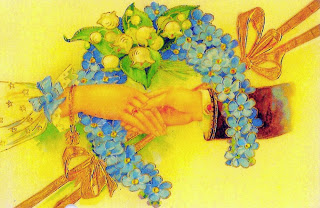 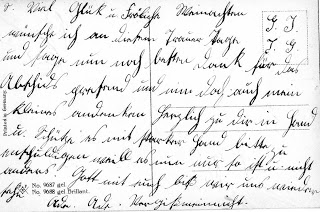 But his greatest trepidation may have been that he was leaving his Lisi behind, hoping she would eventually come to meet him in America. This postcard he sent her doesn’t have a specific date, but its Christmas wishes and melancholy tone place it at the time of his departure.
A small “2” in the upper left indicates that it must be the second page of a longer missive, the first part of which is missing. The romantic image of two hands clasping under the flowery good luck horseshoe seems to reach out to Lisi with longing. I imagine it was sent near the beginning of his trip. It’s a little hard to translate, but it’s about like this:
I wish you much happiness and Merry Christmas on this sad day and say many thanks for the farewell gift. And I certainly will take my little heartfelt remembrance of you and will carefully protect it.
Please excuse me because it is now only as it is and not otherwise. [Perhaps he means, he just has to go, and it can’t be otherwise]. God be with you until we see each other again. Adieu, Adieu. Forget me not.
Next week I’ll post the beginning of his diary, originally posted on Christmas Eve, 2010, the centennial of its writing.
Linda Admin2012-07-31T01:30:00-05:00July 31st, 2012|Ancestors, Family Archaeologist, family history, Genealogy, Germans, immigration, love, memoir, Romania|

Fascinating and what a treasure to still have after all these years! I look forward to hearing more about his journey.