My dad and my two brothers, ages nineteen and thirteen, started shoveling out our car that had been mired for two days in snow after the city’s greatest twenty-four hour snowstorm had brought Chicago to a standstill. They were down near thirty-third and Wentworth, close to IIT (Illinois Institute of Technology) where my older brother, Paul attended, but commuted from our home on Keeler near Montrose. As they dug in their shovels around each of the tires, tossing snow over their shoulders, a group of twelve African American men moved toward them with determined strides.

January 26, 1967, the snow started falling around 5 a.m. Dad got up extra early to drive my younger brother, thirteen-year-old Billy, in his company car to Billy’s Lutheran grade school, four miles south, near North Avenue and Pulaski. Dad then continued on to his roster of inspections of local businesses, as a Loss Control Engineer for Fireman’s Fund Insurance Company. Paul had driven his used car south to IIT (Illinois Institute of Technology).

I was attending Northwestern University in Evanston, in the middle of winter quarter of my freshman year. To save money, I, too, was commuting. Thursdays were the one day during the week that I didn’t have classes, so I was home, studying. The snow upended those plans. By noon, Mom and I had shoveled at least three times since the snow had started falling. It showed no signs of letting up, but we didn’t know that it would turn into a storm that would shatter all Chicago records for a snowfall within a twenty-four-hour period. Fifty-one years later, it still holds that record. 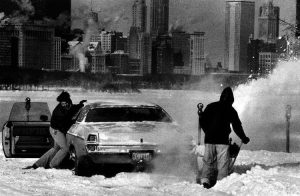 Businesses started letting workers leave work early, but getting home was another matter. Dad left downtown about noon, to pick up Billy. He got to the school about 3 p.m. From there, the usual twenty-minute trip back four miles to our home, took until two in the morning, almost eleven hours. All along the route up Pulaski Road, Dad told me, people would jump out of their cars to help push someone’s car out of a snow-drift, or dig out someone whose wheels were hopelessly spinning.

As a matter of course, Dad kept sand, shovels, and ropes in his trunk, so as usual, he was ready for anything, but the commute was excruciatingly slow.

Paul, meanwhile, had left IIT to head home, but his car had become hopelessly stuck. He decided the best thing to do was to sleep in the car and try to make his way home the next day, Friday, when he started walking the fifteen miles home. He caught a bus whenever he could, but most were already packed and passed him by. He finally got home Friday afternoon.

By Saturday, January 28th, people were digging out. Dad, Billy, and Paul drove together down to IIT to retrieve Paul’s car. They arrived to find cars strewn about, like after a giant’s “pick-up-sticks” game, but few others were already there with shovels and grit.

IIT was located near Wentworth (just west of I-90, the Dan Ryan) and thirty-third Street, an area that had been virtually all black since the 1920s, when it was part of the segregated community of African Americans in Chicago known as “The Black Belt.” Unable to get housing in white communities, this area continued to grow and expand with black families, especially during the Great Migration, which brought hundreds of thousands of blacks to Chicago from the Jim Crow South, first after World War II and  in a second wave, after World War II. By 1960, the “Black Belt” stretched south from Roosevelt to about 97th Street.

We weren’t unfamiliar with, nor afraid in the presence of black folks, like many whites were. My father had grown up in West Garfield Park, and we kids had grown up in this West Side community too, on Washington Boulevard near Keeler Avenue. After the first African American family moved onto our block in June 1963, whites fled by the thousands, but we stayed until we were virtually the only whites left.

In April 1966, we had moved north to Keeler near Montrose, but my parents didn’t sell the three small apartment buildings they owned in West Garfield Park. They made regular trips back to the old neighborhood to shovel coal into the six-flat’s furnace, make repairs, and help their now-all-African American tenants with any problems.

So we didn’t have a knee-jerk fearful reaction to blacks. But as my Dad, Billy, and Paul dug out their car in this all-African American neighborhood and saw twelve large black men moving toward them en masse, they were worried. Were they on the wrong “turf?”

As the dozen men got within hearing distance, one asked, “This your car?”

Dad, Paul and Billy shot glances at each other as the men surrounded Paul’s car, six on each side.

They did. Then the twelve men lifted the car out of the snow bank where it had been mired, placed it down onto a clearer section of street, and gave the men in my family a friendly wave. “Have a nice day,” they said, as they continued on to help the next snow-bound victim.

My Dad rolled down the window to wave back. “Thank you! You have a nice day too!”

People all over Chicago still tell stories of how neighbors reached out to neighbors, how people from all over the city seemed more friendly than ever, realizing we were all in this crisis together. The concern even stretched across racial boundaries, across segregated communities, at the same time Chicago and the nation were embroiled in urban riots and the Civil Rights Movement.

To this day, we still talk about that act of kindness. Thank you, guys, wherever you are.