Father of the Year

When I was in eighth grade, our English teacher, Mrs. Hall, asked all the students in class to write an essay on why we thought our dads should be “Father of the Year.”

I guess I wasn’t paying close attention and didn’t realize it was a writing contest. Mrs. Hall picked several essays that she thought were good and sent them to the Chicago Area Father’s Day Council.

One night after dinner, we received a phone call. My mom picked up the phone, and soon was making the kinds of exclamations that we all knew indicated a happy event. 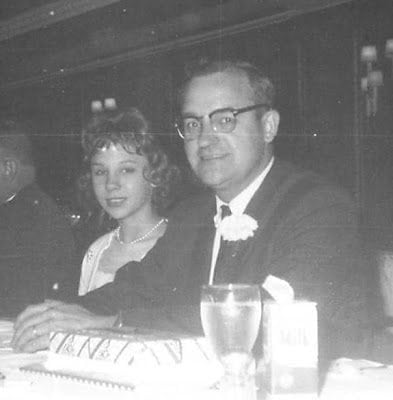 By this time in the conversation we had all gathered around the only phone in the house. “Linda,” Mom said, “that was…I think it was the Chicago Sun Times.” (She misheard the organization’s name.) “It seems that your essay has been chosen as a district winner in the Chicago area search for Father of the Year!”

I was dumbfounded. I liked the idea of prizes, but it hadn’t even registered that my essay had been in contention. I can still see Mrs. Hall, the next day, directing kids to their seats. She was a bit frazzled as I shyly interrupted to tell her the news. I was astounded by her wide-eyed reaction. She called the students to attention, simultaneously grabbing both my shoulders, and turned me to face my classmates.

“I have wonderful news!” She announced. “Linda’s essay has just been named a finalist in the Father of the Year contest!” I felt both proud and a little embarrassed. I wasn’t used to getting so much attention at school. The glow I felt was not just from the honor of having my essay chosen, but also from knowing my dad would get the recognition he deserved.

A few days later, as promised, a telegram arrived. We were invited to the Chicago Palmer House for an honorary dinner. This elegant hotel, (now the Palmer House Hilton) named after one of Chicago’s most prestigious families, where the elite stayed overnight and were wined and dined in its elegant restaurants, was out of our family’s economic league. We felt very special, indeed, to be invited to celebrate in this iconic Chicago edifice. 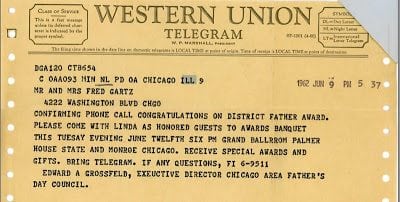 Fifty-six years ago, Mom, Dad, and I dressed in our best, traveled to downtown Chicago, and joined other district area winners to eat a sumptuous meal in the Palmer House’s Grand Ballroom. After dinner, excerpts from each essay were read, and contestants were asked to stand for applause.

I didn’t win the big award. A girl who had used metaphor to describe her father as “king of the household on his easy chair throne” won. It was a good essay– expressing a view of dads in keeping with the the era in which Madmen takes place.

Mine has all the trappings of an eighth grade essay, with its cautious transitions and clunky prose. Despite those failings I see today, we all knew at the time just which lines had reeled in the judges. This little piece I wrote when I was thirteen is as true to my Dad’s memory as anything I could write today, though I hope I could express myself more elegantly now.

I’m sure many of you are remembering your dads fondly and all they taught you about life and love this Father’s Day. I hope that this essay, written more than half a century ago (gulp), triggers unique  memories of your own dad. 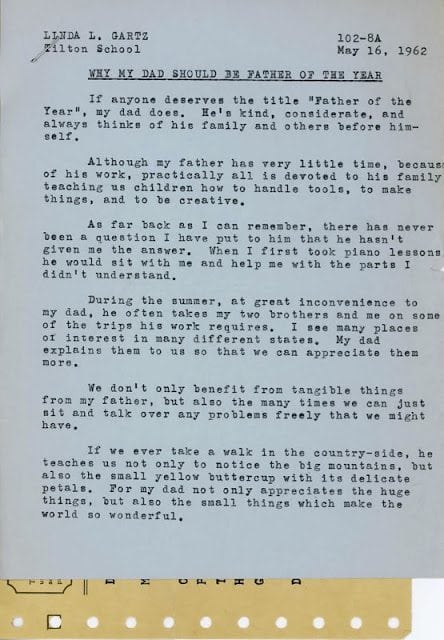 This post has appeared in the past in anticipation of Fathers Day and will continue to appear yearly to celebrate my dad. To learn more about him, my family, and the rapid racial change in our community, please read my book, Redlined,  about growing up on the West Side of Chicago during the 1950s and tumultuous ’60s. Touching on portions of our family’s history in West Garfield Park, beginning with my paternal grandparents’ immigration to America and settlement in Chicago, Redlined is based on thousands of pages of letters and diaries, which my family saved over the last century.