Halloween costumes, when I was a kid in the 1950s, were not store-bought, at least not in my in my family. Halloween was an opportunity to be creative; to bring an idea to life. My dad loved to scope out whatever interesting or unusual items he could find at Goodwill, Salvation Army, and thrift stores. (He once came home with a 1920s style rah-rah raccoon coat he’d bought for $5.) But I don’t recall the purchase of a whole costume. 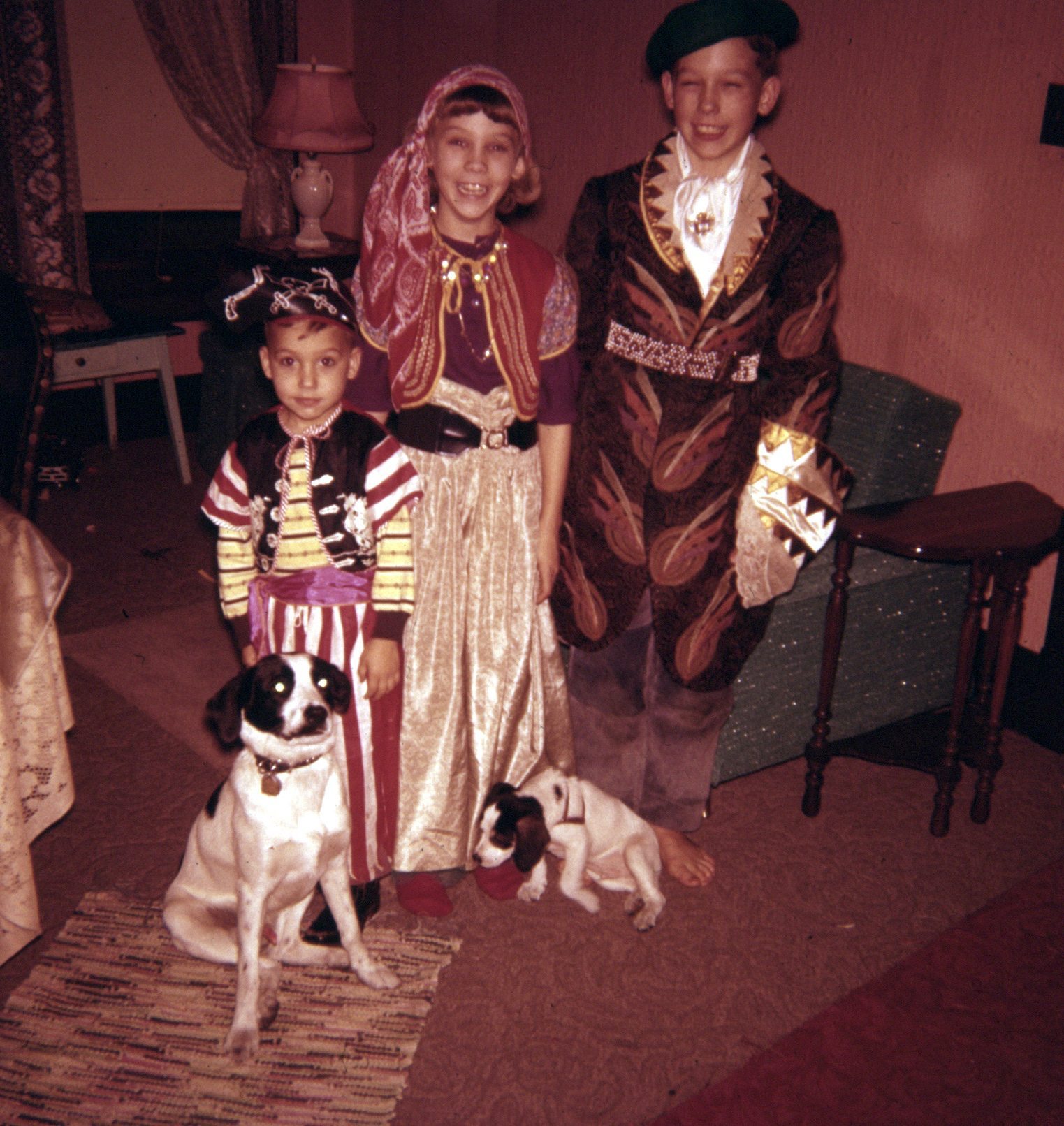 My brothers & I dressed for Halloween 1958; L-R: Billy, Linda, Paul. On floor, Buttons and Bows (Bows, the puppy, is about 8-10 weeks old. Buttons is the proud father), dressed as themselves!

I found this photo of my brothers and me, posing in our 1958 Halloween costumes. These costumes are a bit like “found art,” blending together various “found” bits of clothing. Mom probably bought Billy’s pirate hat (and maybe vest) at the dime store, but the yellow shirt, sash, and striped red pants, maybe from pajamas, were his.

My costume is created entirely from pieces we had on hand: headscarf, shimmery skirt, belt, bolero vest, and glitzy necklace. The heavy brocaded coat on Paul, the satiny shirt and lace cuffs- surely all are bits of clothing Dad picked up somewhere. My parents’ Depression mentality meant that few items were thrown out. We stashed all sorts of things. “We might need this some day,” was my parents’ (especially Dad’s) motto. 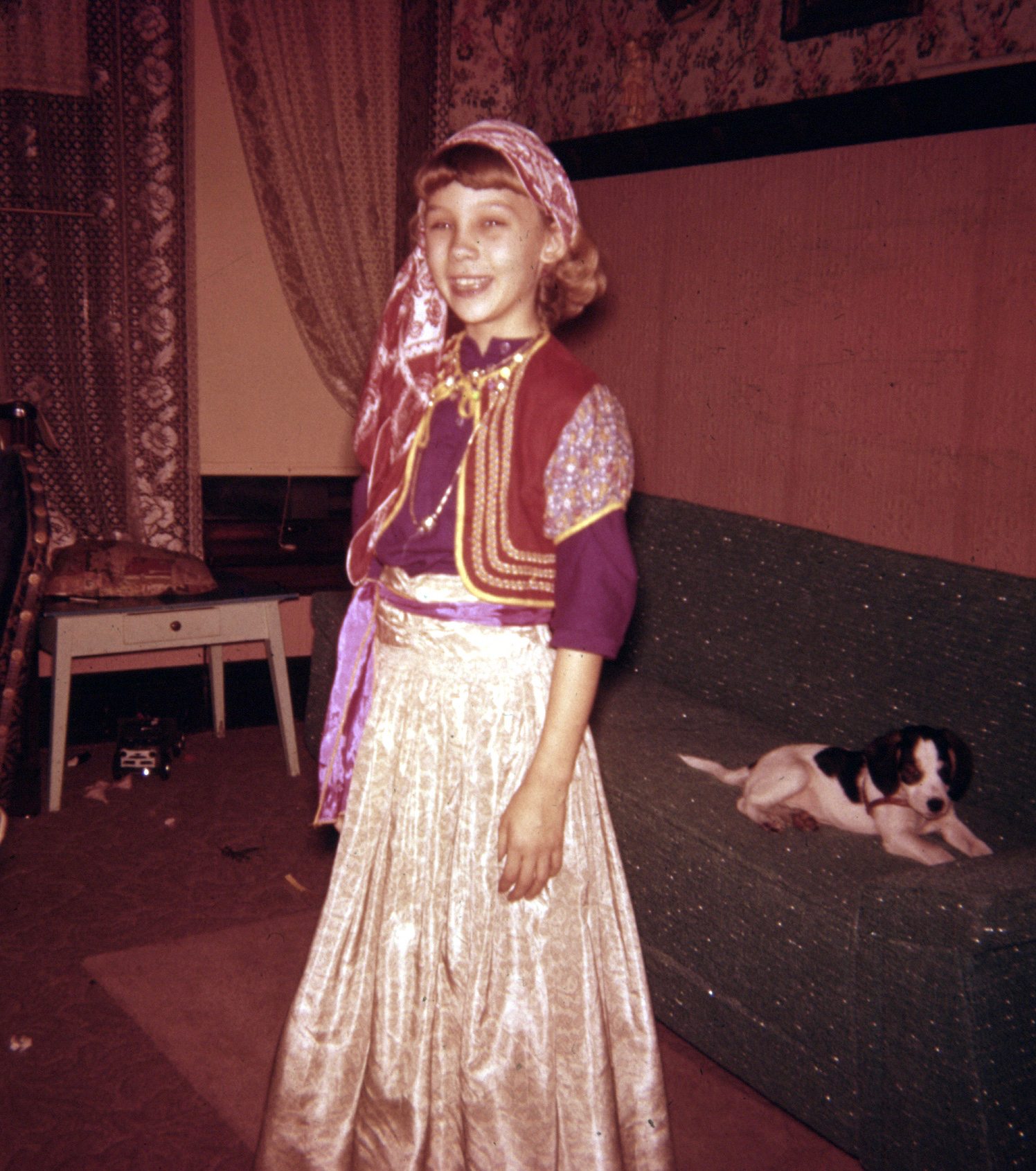 I wonder if  in today’s world  dressing up like a “gypsy” would fall under “cultural appropriation” (or should it be “misappropriation?”) today? But back in the 1950s, it was considered totally ok for any of us European white kids to dress up as a Native American (called, of course, “Indians” at the time), a Mexican with a big sombrero, or an Asian Indian.

As today,  costumes of sports players or super heroes were popular at Halloween. No one even gave a thought to if it would be disrespectful to dress up as a “bum,” (a boy or girl would smear black dirt on the face, wear raggedy clothes and carry a satchel on a stick over the shoulder.

“Cultural appropriation” is a tough one. Of course, there are those who think the whole idea is ridiculous; (e.g., the controversy over the use of  sports’ teams’ names, like “The Washington Redskins” is polarizing).  Others, including 115 organizations, think the use of such sports names are harmful to Native Americans and promotes stereotyping. (Read more about that here.).

Back to my 1958 gypsy costume. Gypsies did not have a good reputation in my paternal grandparents’ home towns in what is today Romania, nor in my maternal grandparents’ home towns in Austria. We were told the women’s voluminous dresses were a clever method to sweep through a store and pilfer, hiding products among the rich folds and heavy real estate of a flowing skirt.

Despite these negative stereotypes, it never would have occurred to me, at age 9 (nor to my parents), that dressing up in this flamboyant manner was disrespectful.

(You probably know that today we refer to the people we called “gypsies” as “the Roma” or “Romani” people. I met many when I visited my grandmother’s home town of Grosspold, Romania. The Roma we met were gracious and welcoming. They lived up the hill from the main town in very poor conditions).

So what constitutes negative stereotyping and true disrespect, “cultural appropriation?”

I found this article (which includes a video) from The Atlantic Magazine. Please comment on what you think of its arguments. “The Dos and Don’ts of Cultural Appropriation.”

I welcome your comments, but please read the article first. Whatever your opinion (and I look forward to hearing it), I do hope you and your children have a happy, and negative-free Halloween.

Redlined: Coming out April 3, 2018. Learn more about “redlining” and the book at LindaGartz.com 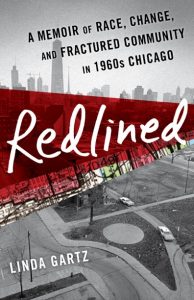 Three really cute kids in great costumes. Halloween 1958 I was a freshman at the U of Illinois. We had a good football team and outstanding halftime shows. The star was our revered Chief Illiniwek whose only appearance was to do a war dance at the end of halftime. Apparently this disrespected Native Americans and 10 years ago the chief was deleted. I thought we were honoring our Illini background, but the wisdom of our then current faculty thought not. I’ve only been to one Homecoming in Champaign since then. Hearing the Illini Marching Band play 3 in 1, the… Read more »

Hi Mike,
Thanks so much for your comments. So glad you liked the post. You probably had a great time during Halloween at U of I. I know it’s hard to let go of cherished rituals. I gather from what I’ve read that many Native Americans felt that the dance, which was originally for an honored, maybe sacred, event, wasn’t really an honor for them at a football game. I appreciate your devotion to the way you envisioned the dance. Should we let the people whose culture we’re using decide if it’s an honor or not? What do you think?

What a fantastic essay, Linda! And the photos really heighten the interest. And it’s packed with truly enlightening information. Thank you!

Thanks for that comment, Lynette! So glad you enjoyed the post and the photos. I love posting old photos and I have SO many! Just have to figure out how to fit them in.

PS. I love you website. It really hits the right tone and the design is perfect. I’m re-doing my site now, and might have to “steal” some ideas from yours.

Thank you Lynette! I’ve been remiss in replying to my wonderful commenters like you. I should be getting notifications, but have to fix that. I so appreciate your support!

Pirate, gypsy, hobo, these were just about all we could scrape together for a night of trick or treating. But dirt on one’s face for a hobo? No, burnt and blackened cork was the method. I can still remember the odor and harsh scraping when it went on. The remedy to remove it before bed was cold cream. Halloween was magical. We could run thru the neighborhood, sometimes alone at night, fueled by a sugar high. We always had a paper grocery bag and by the end of the night it was so rumpled and crumpled that it started sporting… Read more »

Hey Pat, Your write so vividly of your memories of that time. You really make it come to life for me. Now that you mention it, I recall some talking of burnt and blackened cork. I don’t recall doing that, but I can really smell and imagine it from your description. Your dad and uncle sound like fun people, ready for a little hell-raising. Hoo-boy! I can imagine how furious your aunt would have been-especially when she was probably stuck caring for him. When I broke my ankle (seriously-3 hour operation), I couldn’t put any weight on it for six… Read more »

Love reading about you and your family. Interesting stories of your family to remember from the time table given. Pictures are very helpful and we visually can know then what you are relating to us by sight.

Thank you so much for your comment. Sorry for the long delaying in replying. I have to fix something on the blog so I get notifications of comments. I’m so glad to hear you like the photos and that they help you relate to my words. I love sharing it all. Keep watching. More interesting things to come.