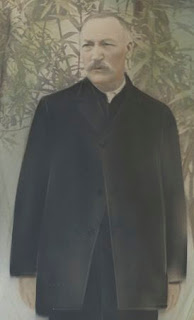 Housing injustice has occurred in many forms over the course of human history, whether it was serfs barely surviving as they toiled for land-owners, Japanese citizens losing their property when they were shipped off to internment camps during World War II,  governments, marauders, or ethnic cleansing stealing land. My book, Redlined, relates how racist lending policies denied blacks the ability to invest in property and interweaves that sad history with my family’s history on Chicago’s West Side.

Because my book is based on a vast family archive, most of which couldn’t be included, I couldn’t resist sharing this story I uncovered in a century-old letter of how property theft affected my family too. (This is an individual case, not to be compared with a federally sanctioned policy that targeted most of African American citizens.)

In 1912-13 a deceitful notary took advantage of my grandfather (Josef’s)  absence to wrongfully sell his property. Josef’s father-in-law, Samuel Ebner, (left) wrote a letter dated May 11, 1913, to his daughter and her new husband, Josef Gartz. Samuel was clearly in great distress over the illegal sale.

It’s a long letter, so I’ll summarize the facts and include only the best quotes from the letter.

Josef Gartz, my paternal grandfather, owned a Hof (home and small parcel of land surrounding it) in his hometown of Neppendorf, Hungary (today Romania). Here’s a photo of a typical Hof that I visited in 2007, probably not much changed over the last century. Josef’s may not have been as large.
The town notary sold the Hof without Josef’s authorization. Samuel and Josef’s mother, Katarina Gärtz, complained about the illegal sale to the notary, whose response was to heap abuse onto the two parents. Samuel wrote: 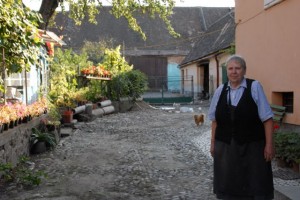 Hof courtyard in Grosspold, Romania Lisi’s home town. House is at right; Pig pen with 2 huge pigs in the back. Owner pictured

I went with Josef’s mother to the notary. I have to tell you, he is an abusive boor, insulting both me and your mother. He even said that if Sepp (nickname for Josef) were here, he’d cuff him about the ears!

I told him that the Hof should not have been sold without Josef’s authorization and now additions have been built [onto the property.]

[The notary] called me a crooked Saxon [this was derogatory, ethnic name-calling] and claimed that I only wanted to swindle him. I told him I am no Saxon. I am an honest German. I demanded the truth from him…and said I would not sign anything before I heard from you [Josef and Lisi] what I should do.”

Katarina Gärtz, Josef’s mother, my great-grandmother, who wanted to sue for her son’s housing

I did everything that was possible, but too much has already been built on your Hof: a well, an anteroom, a back room, a stall of cement, a pigpen also with cement, very nicely constructed and filled with sand. The new owner wouldn’t talk to me.

I inquired about going to court, but your mother will have to pay all the expenses. So I don’t know what I should do.

In other words, the person who had bought Josef’s property had already invested so much of his own money into the hof, it would be hard to get the property back. As is so common even today in America, the expense of a lawsuit precluded getting justice.  Samuel wanted to know if he should buy another home for Josef and Lisi as several were for sale in a nearby area. 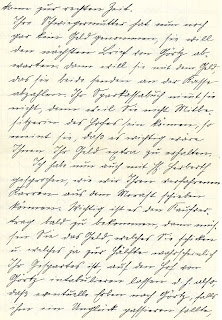 The family even called upon Mrs. Jickeli, Lisi’s former employer and a wealthy merchant’s wife, to see if she could get get any satisfaction, but even a woman with Mrs. Jickeli’s great influence couldn’t help. Mrs. Jickeli had the situation checked out and wrote to Lisi and Josef her opinion.

Josef’s mother can certainly file a lawsuit. However, she will not get any justice in any court, and will have to pay many Kronen [money]. To pursue such a hopeless lawsuit would be to throw money into the air. [It would be better] to save the expenses and buy a new piece of land if you would someday want to come home.

Certainly the folks of the older generation were shaking their heads in dismay at Josef and Lisi’s rash emigration a year a half earlier. Josef had left without fulfilling his military obligation, Lisi had joined him ten months afterward in an impetuous marriage, and now this—Josef losing his house.

Of course, those back in the old country couldn’t have known in 1913 how much would change in just a year, how their country would be wracked and ruined by war, and how dependent they would all become over the next decades on the loving generosity and care of these foolish youths.

Dear Readers: Do you have any stories of being ripped off by unscrupulous real estate people, buyers or sellers? Maybe even your own family? Please share in comments.

Wow. Fantastically unethical (and name-calling), that is intense. So your grandfather (Josef’s) never got his house back! A compelling human story. Thanks for sharing, Linda!

Thank you so much for your comment, Jolma! I had never known this story until I was able to get the handwriting on these century-old letters deciphered by a 90-year-old woman. What a treasure of family and historical information it uncovered!