Corps Cadet, navigator-in-training, Frank Ebner writes to a former high school buddy, Ted Symon. Using his familiar humor, colorful language, and self-deprecation, common in the letters to his buddies, Frank highlights the intellectual rigor he’s exposed to in his courses of study.

The instructors had little room for sympathy when it came to navigator students. If they couldn’t meet the exacting standards, they were out. Any other course of action endangered the missions, and the crews—as the navigators had to know their stuff to get bombers to and from the targets.

This letter Ebner wrote is in our collection because Ted Symon loaned it to us, and my mother typed up his words before returning the letters to Ted.

I know now what a brain cell is and I’m learning how to misuse it. We have been here two weeks and have had one week of solid school. It sure deserves a double underscore. I’ve learned more this week than I had all the time I was in C.T.D. and Santa Ana, Pre-Flight put together.

We received our first weekly exam yesterday and it was a lu-lu. I spread my cheeks, got my head out and went to work. There were only 2 guys in class with a higher grade than myself. I came out with a sweet 95. This gives me a good start on my last leg before my commission. If they don’t decide to quit training Navigators. I don’t that that this will happen yet.

Well, I guess when we get back to normal living again many of our friends won’t be with us to see it all and then again we may not be there to see it ourselves.

I’ll try to keep you posted as things go by but the only time we have absolutely to our own is on our week-ends if they don’t decide we will fly instead. But we have our nights between 2200 and 0600 to sleep.

Till I write again, I’m still your buddy, 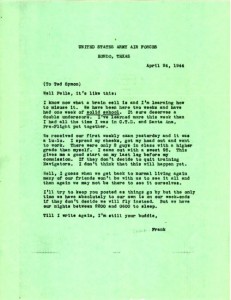