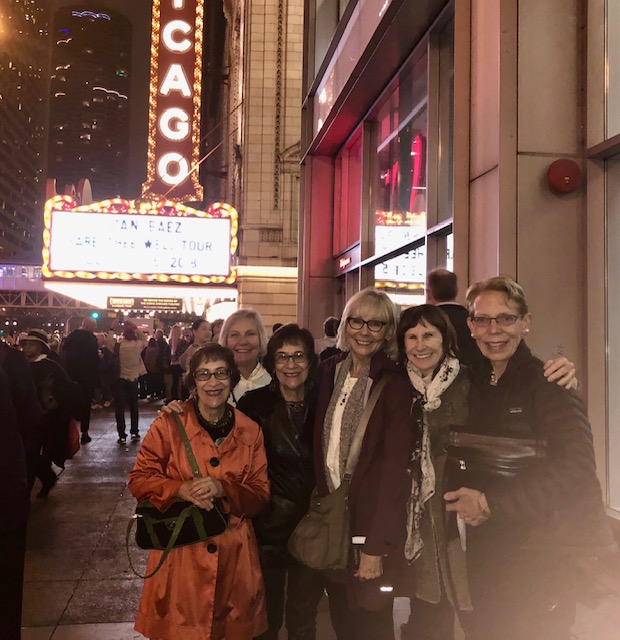 Joan Baez was an iconic singer for those of us who came of age in the 1960s. I bought six tickets in February of this year for her “Fare Thee Well Tour,” which came to Chicago on Friday, October 5th. I was not prepared for the surprise that awaited me.

I invited five friends to join me for a “Girls Night Out” of dinner and Baez’s performance at the beautiful Chicago Theater. Two of my invited friends are twin sisters, who revealed a startling and wonderful memory just before we ordered dinner.

Baez’s visit to the Hirshfield Home

Completely unbeknownst to me when I had invited them, Laura and Leslie Hirshfield had a personal history with Baez, who had performed in their family’s home at a benefit for the “Chicago Committee to Defend the Bill of Rights.”

Leslie and Laura’s parents had both been active in, and contributors to, this organization. Because their parents owned a roomy home, they often hosted events to raise money for various causes. This one featured Joan Baez.

Leslie and Laura were teens at the time, but remember the evening clearly. They recall how down-to-earth and gracious Joan Baez had been. She arrived soaking wet, having been caught in a rainstorm. She took off her sodden shoes upon arrival at the Hirshfield’s, where the parents offered her a change of clothes and a pair of slippers. In those few moments that she was barefoot, young Laura remembered this detail: “She had beautiful feet.”

“Beautiful feet and graceful hands,” added Leslie. The two sisters have a penchant for finishing each others’ sentences – or one completing a thought of the other. 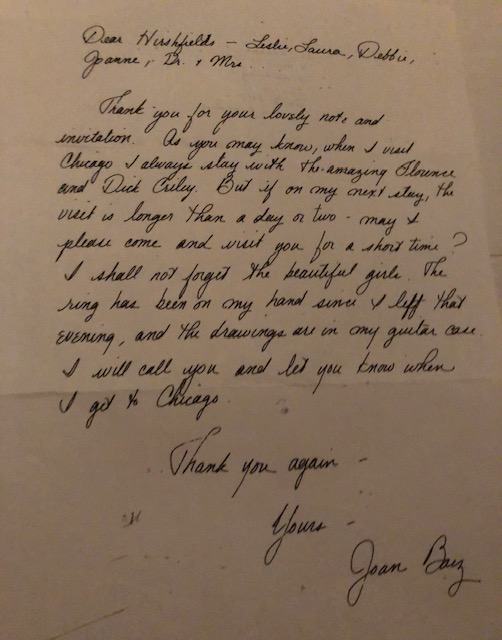 Letter says:
Dear Hirshfields – Leslie, Laura, Debbie, Joanne, Dr. & Mrs.
Thank you for your lovely note and invitation. As you may know, when I visit Chicago I always stay with the magazine Florence and Dick Criley. But if on my next stay, the visit is longer than a day or two – may I please come and visit you for a short time? I shall not forget the beautiful girls. The ring has been on my hand since I left that evening, and the drawings are in my guitar case. I will call you and let you know when I go to Chicago.
Thank you again –
Yours –
Joan Baez

Imagine – my buddies, who live just a few blocks away, had made Joan Baez a peanut butter sandwich! And then Baez sang right there in their living room.

“She had the most gorgeous bell-like voice I’d ever heard. We could hear her from our bedroom,” said Laura.

“We were too shy to come down the stairs to be with a bunch of people,” said Leslie, “but we did come down to listen from the stairway.”

“She had no artifice,” said Laura. “Just like today when we heard her in the concert. She’s still the same person–down-to-earth.”

Leslie: “No makeup. So beautiful! Slender and beautiful.”

From weight lifting to the weight of history

I met Laura and Leslie in an early morning exercise class at the local McGaw YMCA. Over time, we became friends. But I never realized their parents’ history of activism until we went to the Joan Baez concert, and they pulled out copies of the invitation to the Baez concert and a lovely thank-you note, handwritten to the Hirshfield family by Baez.

A family of activists

The Hirshfields’ dad was an internist, and their mom was an artist and activist.

“I always remember my mom marching,” said Laura. “She was in Washington. [The August 1963 “March on Washington,” where Martin Luther King Jr. gave his “I Have a Dream” speech]. She marched to Selma. She did a ton of stuff with civil rights and housing.”

Leslie: “Oh yeah! She was an activist. She started the Peace Center here [Chicago].”

Laura: “She organized that. And a lot of her artwork deals with [subjects like] Hiroshima, the Holocaust, Police brutality, ecology.”

Leslie: “Because of her, we [three sisters] all became artists.” 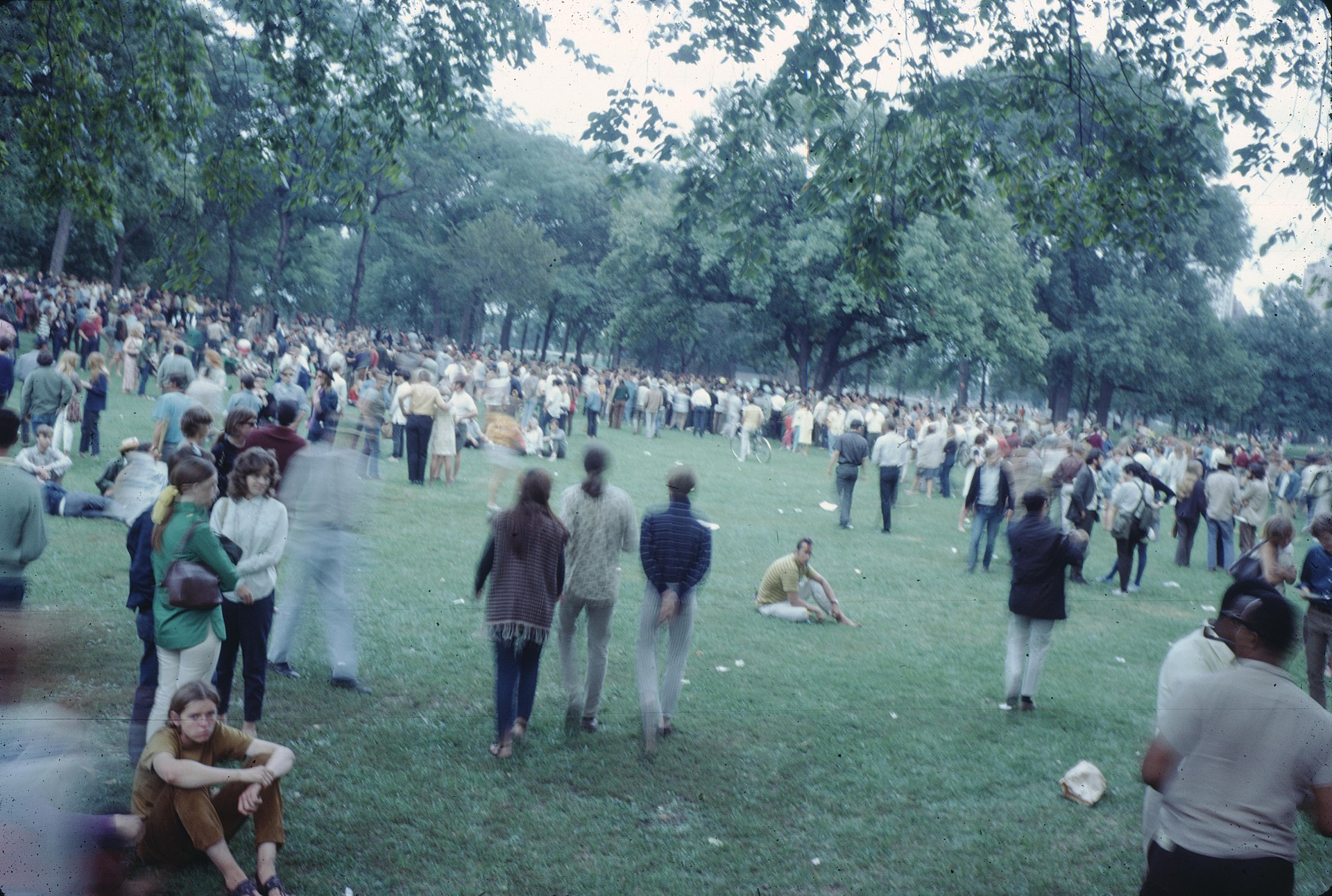 In my memoir, Redlined, I describe how a combined total of about 20,000 Chicago Police officers, National Guard, and U.S. Army troops confronted 10,000 demonstrators against the Vietnam War, who had come to Chicago at the time of the 1968 Democratic Convention to press their demands. It wasn’t super organized and then-Mayor Daley was determined to keep “control.” He was doomed to failure.

Once the tear gas started, it was a melee, and police started cracking heads or beating anyone in their path. Leslie and Laura’s mom left with their sister, Deborah, but her dad stayed to work with Dr. Quentin Young (1923-2016), renowned for speaking out on social justice and health. Together they bandaged wounds and cared for the injured.

I took photos of the invitation right at the table, in the restaurant where we ate dinner before the concert, and with their permission, I’m posting them here. 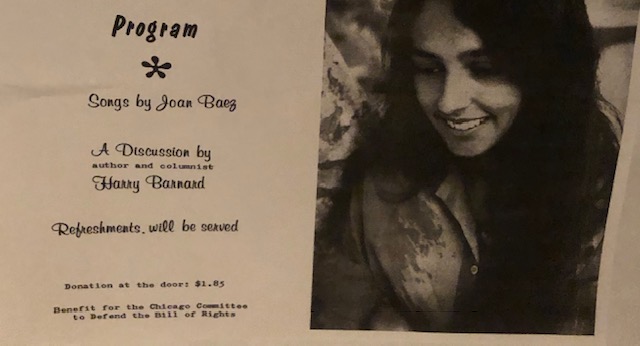 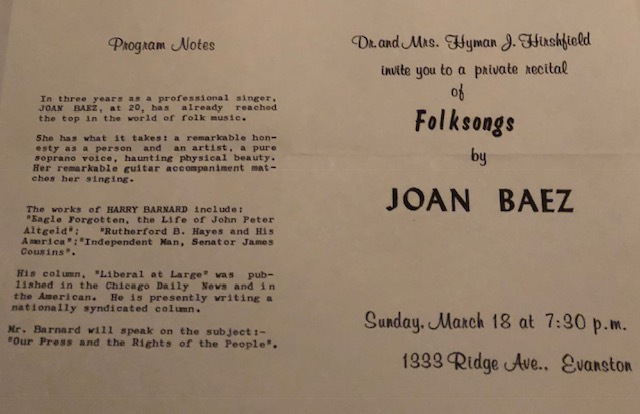 They also shared with me a framed drawing, which they photographed for this post. Baez had created it for their parents. 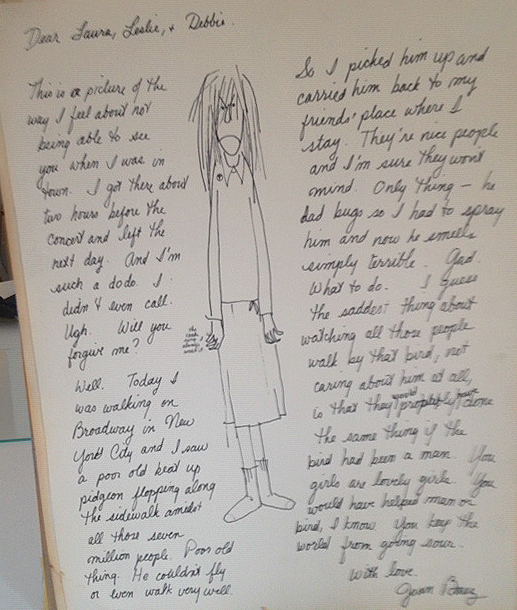 Letter says:
Dear Laura, Leslie, + Debbie,
This is a picture of the way I feel about not being able to see you when I was in town. I got there about two hours before the concert and I left the next day. And I’m such a dodo. I didn’t even call. Ugh. Will you forgive me?
Well. Today I was walking on Broadway in New York City and I saw a poor old beat up pigeon flopping along the sidewalk amidst all those seven million people. Poor old thing. He could fly or even walk very well.
So I picked him up and carried him back to my friends’ place where I stay. They’re nice people and I’m sure they won’t mind. Only thing—he had bugs so I had to spray him and now he smells simply terrible. Gah. What to do. I guess the saddest thing about watching all those people walk by that bird, not caring about him at all, is that they would probably have done the same thing if the bird had been a man. You girls are lovely girls. You would have helped man or bird, I know. You keep the world from going sour.
With love,
Joan Baez

The October 5th concert itself was classic Baez. She’s still a warrior for social justice, for the rights of the downtrodden, for those whose stories are so often hidden or not believed. She sang so many songs my generation remembers from the 1960s and ’70s, including the classic “Diamonds and Rust,” about her lost relationship with Bob Dylan. The audience sang along.

But a highlight of the evening was when Leslie and Laura shared their memories of Joan Baez singing at their home, a place where social justice wasn’t just a throwaway term, but was lived out loud by her parents: in their mom’s marches, in their dad’s caring for the wounded at the Democratic Convention in 1968. In a home where a twenty-year-old Baez took off her soggy shoes and demonstrated a gentle, kind spirit in the moment—and in the letters she later sent that expressed gratitude. A good and beautiful remembrance as we move into the season of gratitude.