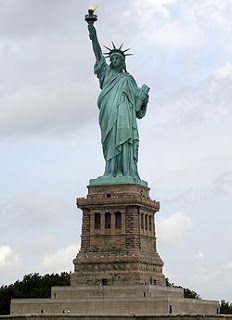 This post was originally published on Jan. 11, 2011, and the the references to the 100th anniversary are based on that date.

Today is the 100th anniversary of Josef Gärtz, my paternal grandfather, arriving in America, losing the umlaut over the “ä” and becoming Gartz. My guess is that he didn’t record his first impressions because he was too excited and overwhelmed upon landing to be scribbling in his diary. So without his words to guide me, I’m going to try to briefly reconstruct what he, and all of our European ancestors who entered through Ellis Island, probably endured as initiation into this new land. 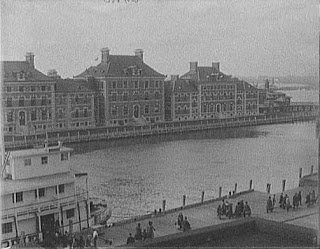 Let’s join Josef as he disembarks from his ship, Friedrich der Grosse on January 11, 1911, and get just a little flavor of our ancestors’ arrivals.

After passing the Statue of Liberty in New York Harbor, steerage passengers (undoubtedly how Josef traveled–the cheapest) are loaded onto barges, transferring them to Ellis Island, where they will undergo a number of inspections before being admitted to the United States. 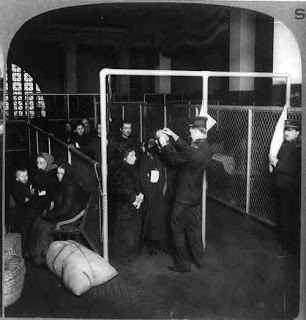 In many ways, Josef is typical of the immigrants arriving at this time. Like Josef, most of them (68-90%) fall between the ages of 14 – 44. He is 21. About half of the men in this age group are single, like Josef. But his skills aren’t typical: about one fourth of the immigrants, the largest percentage, are “common laborers,” while about 15% are “skilled laborers.” As a master carpenter, Josef belongs to the latter group. That probably bodes well for finding decent work. The others are primarily farm laborers or servants. Only one percent describe themselves as “professionals.”

After all the health inspections, inoculations, and eye examinations, Josef has already endured before arriving in America, he, and everyone else, is once again subjected to prodding, peering, and poking, and all are further questioned as to their ability to support themselves. Failing these tests ends the dream.

In the twenty years from 1892-1912, 169,312 aliens were refused entry, overwhelmingly for three main reasons: likelihood of becoming a public charge, affliction with “loathsome or dangerous contagious diseases,” or due to being “contract” laborers (why this last one kept out almost 13% of immigrants in 1910, I haven’t a clue.) 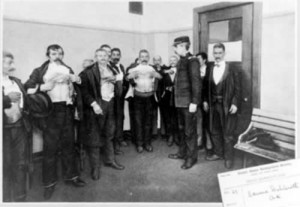 It has to be nerve-wracking to wait in these endless lines, to wonder if some small oversight will send you back across the ocean. But all goes well. Josef overcomes the final hurdle and enters the United States of America. I can only imagine the elation and anticipation. (I’d love to hear from any of you, Dear Readers, who has a note, a diary or a memorable story passed down as to what  an ancestor’s first emotions were upon realizing he/she was actually starting a new life in America.) 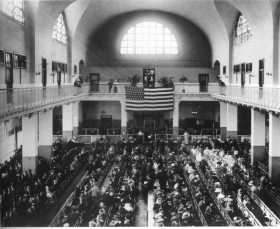 Next stop: Cleveland, Ohio, where a “Landsman” (another Siebenbürgen/Transylvanian German, from his home town of Neppendorf) will welcome him into his home, help him get on his feet, and teach him the ropes.

So it was with so many who sought out friends and relatives from the “Old Country” who could ease their way into the “New Country.”

In the near future, I’ll be posting some of the missives that went back and forth between Cleveland and Romania, and how Josef pulled out all the stops to get his Lisi to join him.

But before we get to those letters and postcards, I want to get back to what I promised to write about in my last post: how I got my German mojo back which allowed me to tackle these letters that allow us to peer into the minds of two young immigrants a century ago.

Note, except where noted othewise, the Ellis Island facts and photos included here come from this site: Gjenvik-Gjønvik Archives. The site provides footnotes at the end of its pages.

I would really love to know what my ancestors were thinking after they stepped out of the processing center. Was it overwhelming? Or did they have a relative there to make it easier? If there was no relative or friend to greet them, how did they know where to go? Navigating a new country and new language must have been frustrating. That is personal account I would to find.

I agree with you, Heather. It must have been overwhelming. My guess is with so many foreigners arriving every day, Ellis Island staff probably had some language skills. I’m sure one could find original accounts somewhere on the web — perhaps even in our genealogical community. Thanks for dropping by!

We’re taking our kids to Ellis Island this month. Reading your post gets me so excited for this journey…even more excited than I was already!

Hi Christine!
Excellent trip for kids. I’m so glad this post added to your anticipation!

This is such a great blog! What an inspiration. I discovered my father’s story when he was in his 80’s. He’s 91 now. But that’s just a small piece of the story.

Congrats on everything you’re doing to put the pieces of the puzzle together. It’s kinda fun, isn’t it! Karen

Hi Karen,
Thanks so much for your kind comments. I’m so excited when someone finds all this inspirational. I’m taking a bit of a hiatus as I am involved in several classes and some other compelling, time-consuming life events. Loved hearing from you!

hi i’m from korea, i googled family tree for my assignment haha and than i found this wonderful blog..!! it’s really i feel like reading a good novel ! enjoyed much i will discover my family’s history and post like this someday. have a good day

Thank you so much for your lovely comment, K Young. Great to hear it reads like a novel. There IS lots of adventure. Wait till you see the book!

Thank you – and good luck with your assignment!