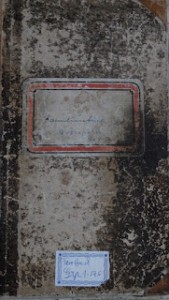 This is a repost that was originally published on this blog on Dec. 7, 2010

My grandmother kept a photo of her hometown church tucked into the hymnbook she brought with her from Romania. No wonder. That church was more than just a place of worship. It was the repository of her entire community’s history. That’s why my brothers and I made the Grosspold Lutheran Church a crucial stop on our roots-finding mission to Transylvania/Siebenbürgen in 2007. But we had no idea just what we would discover.
After finding the Ebner family house number (403) during our background research in Hermannstadt/Sibiu, we arranged to meet the Grosspold church’s minister, Pastor Meitert, who presented us with enormous volumes of ancient ledgers and narrowed down our grandmother’s family to this one. Centuries of handling is worn into its cover on which is handwritten: Familienbuch Grosspold  [Grosspold Family Book].
Like churches throughout Europe, the Lutheran church in Grosspold encapsulated the lives of its parishioners in columns and dates maintained in “Family Books.” A sense of life’s harsh calculus in 19th century Europe emerges from those stark numbers.
Pastor Meitert used the Ebner “house number” (Grosspold has no typical street addresses — only house numbers) to search the book, and began turning the pages. History was literally unfolding before our eyes. At the top of page 283, the name “Samuel Ebner,” my grandmother’s father, was handwritten under the heading, “Name of Family Member.” 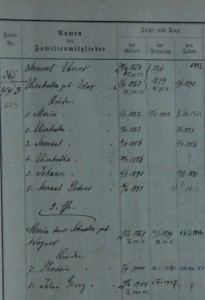 Here’s page 283, photographed at the church.

Under Samuel’s name is “Elisabetha Ebner, geb. Eder” [née Eder], my grandmother’s mother. The next three columns record the “year and date” of each family member’s birth, marriage, and death. (I cropped out additional columns with little info to make viewing easier). The entries show Samuel Ebner was born December 20, 1854, and married Lisi’s mother, Elisabetha Eder, on November 23, 1879. He was 24. Born September 3, 1863, Elisabetha was only 16.
Their first child, Maria, arrived about two years later, February, 1882. What good news this book holds! I imagine Samuel and Elisabetha’s  thrill. But then the entries turn tragic. The next baby, born in December, 1883, was named Elisabetha, after her mother. It was winter. She died three and half weeks later. A little boy, Samuel, bearing his father’s name, was born in April,1886. The book records he died July 2, 1886, living only two months.

Names were assigned to children over and over until they could stick. My grandmother was given the same name as her deceased sister, Elisabetha. But the book erroneously records her birth as July 30, 1886, impossible since baby Samuel was born three months prior to that date. The year should have been 1887. A good archaeologist has to be sure even recorded history makes sense! But it makes me wonder. Was the pastor pondering little Samuel’s birth and death dates when he absentmindedly entered the wrong year for my grandmother’s birth?

Only 23 when my grandmother was born, my great-grandmother had already suffered through the deaths of two children. But more heartache for the family was to come. In May, 1890, little Johann was born. He lived one year. My grandmother would have been nearly three when her baby brother died. Her parents’ grief must have affected even a child so young, but she never spoke of it. She would have plenty of other losses to hold in her heart.

Elisabetha gave birth again in June, 1893, another little boy, again named Samuel.  But his mother never got to see her only son live to grow up. Death bypassed Samuel—for the time being—and sought out his mother this go-around. On January 13, 1898, thirty-four-year-old Elisabetha succumbed to what Grandma later told us was pneumonia. 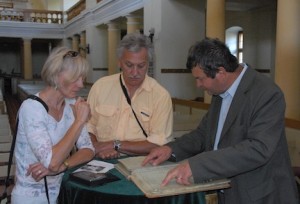 The book doesn’t record the cause of death, but in an era prior to antibiotics, disease was the likely culprit for every death the Ebners endured. In this one family’s ancient record, we see first-hand the kind of loss endured by virtually all families of that time.

Left motherless, Lisi (my grandmother’s most common nickname) clung ever more tightly to the father she adored. But then she felt he, too, was taken from her. What happened next spawned an amazing coincidence a century later to be explored in the next post.