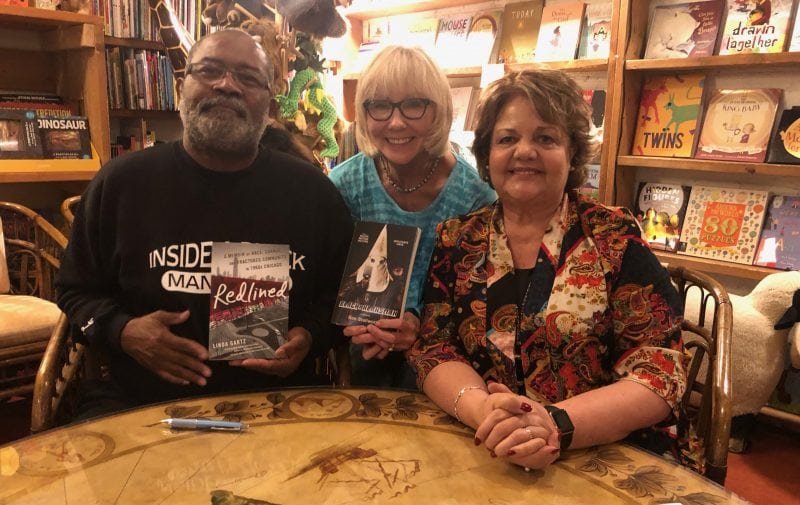 I met the real Black Klansman, Ron Stallworth, author of the memoir, BlackKklansman, last Monday night at our local Evanston bookstore, Bookends and Beginnings. It’s a small, indie bookstore with nooks and crannies, that somehow packed in about 100 people. The event was sold out weeks in advance with a waiting list. Evanston’s main library had a room prepped for an overflow crowd, live-Facebook streaming the event. I got to the bookstore an hour early, and the line was already wending its way down the alley.

I was especially interested in hearing Stallworth speak because my son’s former classmate, my dear friends’ daughter, Laura Harrier, is the female lead. (Photo at left.) Laura’s mom, Linda, and I have been buddies since our kids were in fourth grade, and she’d been giving me behind-the-scenes production stories for months. 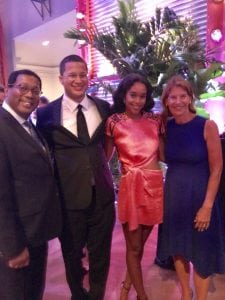 I’d seen the movie soon after its release because I wanted to see Laura (who did an amazing job portraying a black activist, huge Afro and all) from the era. I’d read some reviews, but they hadn’t really prepared me for the powerful message the movie sent. I was eager to meet the African American man who dared to infiltrate America’s most notorious white supremacist group, a serious enemy of black people: the Ku Klux Klan.

I’m not sure exactly what I expected at the bookstore. Usually a presentation includes reading some portion of the work, a chance to discern the kind of person authors really are, behind the public personas, and how they came to write their books.

In the case of Stallworth, I think I was anticipating meeting a man with a certain amount of swagger. After all, his book is a New York Times best seller and was made into a wildly popular movie by the renowned film director Spike Lee. Stallworth took on an outrageous and dangerous assignment: that of a black man infiltrating the KKK. He had to be bigger than life!

But the reality of the man couldn’t have been different. 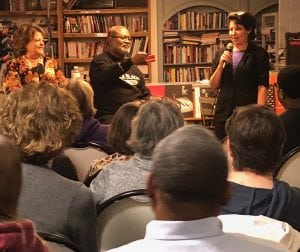 Ron Stallworth, showing the audience his original KKK membership card from when he infiltrated the KKK to expose their criminal plans. Wife, Patsy, to left. Nina Barrett with mike.

Above all, Ron Stallworth is humble—in the best sense of the word. He has a subdued confidence, and not a trace of braggadocio. He seemed to still be in a bit of shock at the impact the movie, BlackKklansman, based on his memoir, has made on viewers.

He looked over the small space, jammed with folding chairs, all filled, and said, “I never dreamed I’d be talking to a group like this about my work.”

He had the charm of a man who is not impressed with himself, but amazed at what he is actually doing: traveling on a whirlwind book tour with his wife, Patsy, by his side. He seemed to want to pinch himself, to see if it were all a dream–that wherever he went, people were eager to hear him speak about his experiences forty years ago.

The bookstore’s owner, Nina Barrett, asked him about his bravery. “I don’t feel I was brave,” he said without a trace of false modesty. “I was a cop doing my job.” But it was what he had to say about meeting and talking to David Duke, Grand Wizard of the KKK, that was most chilling, along with the comparisons Ron saw in our present day.

“David Duke was a very personable man,” Ron told us. “He was an easy conversationalist, someone you felt you could talk to about anything. Pleasant. But once the topic went to race, Dr. Jekyll became Mr. Hyde.”

Duke told Ron that blacks had low IQs, less intelligence than chimpanzees, that they needed to be exported from the country to an island somewhere; that, and this is really strange, Jews, whom Duke also despises, should be the ones to lead the black people away because blacks themselves are too childlike and stupid to even find their way themselves!

BlackKklansman in this era 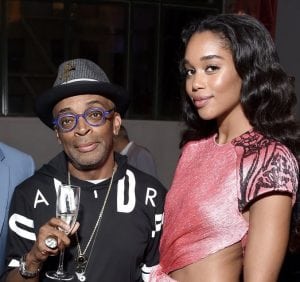 One thing Ron emphasized, and the audience agreed with, was that this movie is having an impact now that it wouldn’t have had ten years ago, primarily because of the times we live in. In the movie, Spike Lee drew unsubtle comparisons to the KKK and our country’s present leader. Ron backed up those comparisons. “David Duke said, ‘We have to make America great again,’ and by that he meant get rid of the blacks. Back to the ‘good old days.'”

“My heritage is German and Irish,” Duke had told Ron Stallworth. “The Irish and the Germans built America. We have to preserve the white race.” I guess Duke had never heard of slaves creating the economy of the South or the Chinese building our railroads, or the myriad of other ethnic groups and immigrants who are in this moment making America great, in disparate fields, from tech to agriculture.

The times during which America was not great, when it didn’t live up to its promise, are the times we showed shameful prejudice toward our citizens: locking up the Japanese during World War II, denying Americans like my dad a job because of his German heritage, and most heinous, our treatment of our black citizens, first as slaves, then in the Jim Crow South, denying blacks loans for homes, refusing black veterans the benefits of the GI Bill, and locking up black men now in unprecedented numbers.

Duke told Stallworth they should get their thirty and .30-06 guns and “shoot wetbacks who walk across the Rio Grande.”

Stallworth added, “Donald Trump is the physical embodiment of what David Duke wanted to accomplish forty years ago.”

That’s why this movie is having such resonance today. That’s why a regular guy like Ron Stallworth, with his genuine and candid demeanor, in his own humble way, is creating powerful blowback on our bloviating president.

hi linda. quite interesting. spike’s movie was just fantastic. the best i’ve seen this season. keep up the good work.

Thanks for reading and commenting, Tom. I loved the movie, and seeing our hometown gal, Laura, as a star!

What a great experience to meet the real Ron Stallworth. Thank you for sharing your impressions and his voice.

It really was wonderful, especially because of his gracious, unassuming nature. Thanks for reading.

Sounds fantastic, Linda. I am impressed by all you do.

Thank you, Jolma! As I’ve mentioned, I love your site and its beautiful photos of the place you call home.