This Memorial Day, I’ll tell you about my uncle, Frank Ebner Gartz, known to the family simply as “Ebner,” [ABE-ner]. He was a “prince of a guy,” my dad said often, and he was also a crack navigator on the B-17 Bomber during World War II. In one of Ebner’s letters home, he speaks forthrightly of how he coped, facing death from the carpets of FLAK surging toward him over and over and as German fighter planes buzzed the B-17 to shoot it down. I’ll finish with a tribute to the 75th anniversary of D-Day, which Ebner also wrote home about. 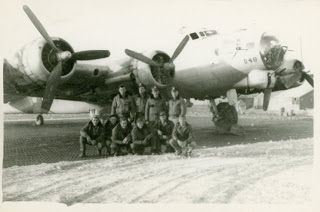 Frank was stationed with the Second Bomb Group at Amendola Air Base, near Foggia, Italy, on the Adriatic Coast. The death rate for airmen was high, with carpets of FLAK cutting right through the planes’ exterior, dismembering and killing the crew members, and the German fighter pilots going under around and over to shoot down the B-17s.

Coping with the threat of imminent death

How did these “youngsters” of 18-20 deal with the stress? Some did. Some didn’t.  One of my favorite quotes from Ebner’s letters was advice he gave to his bombardier, whose actual last name was Booms (did a name define his destiny?).
The bombardier and navigator sat in the half-spherical Plexiglas nose of the B-17, able to see clearly all the enemy flak zooming toward them. Frank wrote to my grandfather after a particularly harrowing mission in March 1945: 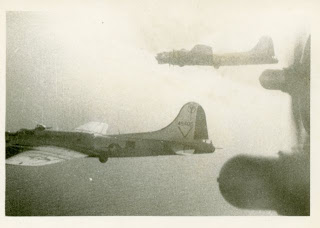 Lt. Booms, my bombardier, had a rough time. He said that they threw everything they had at us including their kitchen sinks. Booms has to sit up in that Plexiglas nose where he can see all that stuff exploding around him. It sort of gets on his nerves. I was trying to explain to him that when your time comes it doesn’t matter where you are…your number is up, and that’s all there is to it.
Such was the fatalism of a twenty-year-old who faced death every time he navigated his crew of other young men on their missions.

Ebner trained for two years in the Army Air Corps, including a grueling stint in the navigator school in Hondo, Texas, where he feared he might not make it. He was in Hondo when he heard the news about D-Day, and wrote to his parents about it.

The odd coincidence was that this all-important date in starting to bring an end to German dominance in Europe also happened to be my grandfather’s 55th birthday. Ebner notes the fact in a letter home, with an understanding of D-Day’s significance. He wrote:

Wasn’t it strange how D Day came on Dad’s birthday? It won’t be long now.

But it was almost another full year before VE Day (Victory over Europe) arrived (May 8th 1945), with thousands more deaths in every service branch–a long, deadly road still to travel to reach victory. Ebner had eight more months of training, followed by twenty-five missions from January to May 1945.

Thank you to those who served and still serve, and to their families. May our leaders make wise choices as to how America will risk your lives, too precious to waste on pique, balderdash, and bombasity.

Always on the mark, thanks for sharing..how many lives were lost, but they were brave and felt that was their duty, God Bless Them all…