Protests are erupting across Minneapolis as I write this. Hundreds of African Americans and white Minneapolis citizens, outraged by the blatant murder of a Black man, George Floyd, are demanding justice. 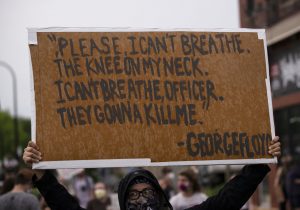 Photo: Courtesy of The Guardian

Most of you have undoubtedly seen the seriously edited version of video already. A callous white police officer casually presses his knee into Floyd’s neck for eight to nine minutes as he lies handcuffed on the street, repeatedly croaking out, “I can’t breathe. I can’t breathe.” And the bystanders repeatedly call on the police to get off him.

But watch the full ten minutes on the Facebook feed of Darnella Frazier.

It’s beyond anything you’ve seen edited.

“You’re a bum, bro,” says one man. and “He’s not resisting, bro.” After six minutes: “He’s not f-ing moving, bro.” They keep repeating this as the standing officer just stares at them. The kneeling officer continues to keep his knee on Floyd’s neck for minutes after he’s stopped moving. It’s clear he’s no danger at all.

“You just killed that man, bro.”

The witnesses, more than one videotaping this killing-in-action, keep telling the police officer to let up, that the man on the ground can’t breathe, that he’s being treated like an animal. One of the three other police officers at the scene, the one who shows up in the video, [none did anything to intervene], keeps pushing the group of witnesses back as if killing a helpless victim is “nothing to see here, folks! Just keep on moving. Nothing to see here!”

A reminder of lynching postcards

I have seldom felt such a chill come over me, watching that video, such a pit in my stomach, except for when I viewed those lynching party postcards from decades past, sent to friends and relatives as if they were from a vacation—postcards with photos of smiling crowds of white folks, often having picnics, gathered ‘round the limp, hanging Black body of someone’s son/brother/father/cousin/nephew.

I feel as if I’m watching a replay of the distressing last words of Eric Garner, held in a fatal chokehold by Officer Daniel Pantaleo six years ago. Despite the medical examiner’s testimony that Garner died as a direct result of the chokehold, a grand jury did not indict Officer Pantaleo!

Of course, every Black American knows this is the pattern. White police officer kills a Black man (or sometimes a woman) and never faces justice.

The unusual case was when Chicago police Officer Jason Van Dyke was convicted of murdering Black teen Laquan McDonald in 2014. And that was only because of a video as well. Before videos, it was the police officer’s word against the witnesses, and the police always won.

Even in this case, the police officers lied, claiming this, according to police spokesman John Elder: “After he got out, he physically resisted officers. Officers were able to get the suspect into handcuffs and noted he appeared to be suffering medical distress.” [Italics added. Right! He suffered medical distress—and death, after his neck was kneeled on for eight-to-nine minutes!]

Note: This surveillance video, part of a CNN report, shows that Floyd in no way resisted arrest.

It’s chilling to watch someone be murdered in real-time when the officers of the “law” are perpetrating the killing instead of preventing it. As one Black woman who had belonged to my church on Chicago’s West Side told me, “The people you think are there to protect you as White people, we see as against us.” I can’t think of a more fitting commentary to what we’ve just seen in Minneapolis.

In the last month, I’ve read three eye-opening books, two related directly to race, and Gladwell’s book recalling the Sandra Bland case as one example of “talking to strangers.” I recommend any of them if you’re interested in learning more about how race functions in our society.

Biased: Uncovering the Hidden Prejudice That Shapes What We See, Think, and Do by Dr. Jennifer Eberhardt, Stanford sociologist

White Fragility: Why It’s So Hard for White People to Talk About Racism by Robin DiAngelo

Talking to Strangers: What We Should Know About the People We Don’t Know by Malcolm Gladwell. He starts and ends the book with the story of Sandra Bland, the African American woman stopped by white State Trooper Brian Encinia in 2015 for failing to signal a lane change (she’d moved out of the police car’s lane so he could pass). The exchange escalated into her arrest (partially recorded on Encinia’s dashcam, a bystander’s cell phone, and Bland’s own cell phone. She hanged herself in jail three days later).

My website lists many more books related to the racist federal policy of redlining, the effects of which are seen today in the much higher rate of deaths from Covid-19 among African Americans.

While we all have been so preoccupied with this pandemic, to watch what happened to George Floyd is sickening and calls for everyone’s full attention. It is compounded by what now becomes a weekly occurrence (daily in communities of color) on the news of another innocent black person shot while jogging, shot 7 -8 times while sleeping in her bed, or just threatened for bird watching in Central Park.

Thanks for your comments, Carla. I couldn’t agree more. I actually intended to include references to those two recent incidents (I had posted on Twitter and FB about Ahmaud Arbery, the murdered jogger). WordPress gave me endless problems and I had to spend about three hours yesterday and another two hours today just to get this post up, and the tease in the email was messed up. Thanks for clicking through!