Even handwritten documentation from our ancestors can lead us astray as we search for the details of their pasts. In my case, it was my grandfather’s diary, a primary document, in which he had written the name of a ship on the first page. At the bottom, under a list of three “Kaiser ships” he had handwritten, “Kronprinz Wilhelm.”

This seemed a pretty good clue that this was the ship that brought him to America, as he had not noted a different ship’s name anywhere else in his diary. However, as I had originally posted, I could not find his name on the manifest (list of passengers) for the Kronprinz Wilhelm, which had arrived on January 12, 1911, a logical arrival date for a ship that had left, according to his diary, on December 31, 1910. I also tried searching any ship around that time, thinking perhaps we had the wrong ship. I tried entering just the “sounds like” for his name, but included his birthdate as 1889, give or take a few years. No luck.

Recently, through the German contact that helped me decipher my grandfather’s diary from the old “Gotisch” German, I was put in touch with Monika, a woman whose specialty is researching immigrants from the Siebenbürgen area to North America. She has looked for hundreds of names on ships‘ manifests, and knew the pitfalls. She said she also prefers the Steven Morse site (vs. the Ellis Island site) to search for ship manifests.

When she noticed I couldn’t find my grandfather’s manifest, she searched and found it! As she said, “The problem is that the transcribers [of the original handwritten documents] came up with the most outlandish spellings in the indices at Ellis Island (and at any of the ports). It took more imagination to come up with what they did than to read what was in front of them.” Of course we are searching what the transcribers for the data base thought they read–not what was actually written. 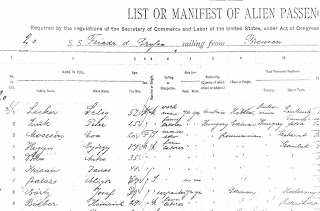 In my grandfather’s case a couple of errors. First, his name was transcribed as “Gortz,” a misreading of the name that is understandable–it could be “o” or “a” as handwritten.

But the real goof-up came with his age. The manifest had originally noted his was “29,” but then sloppily corrected his age, rightly, to “21.” The transcriber missed the confusing correction and miswrote his age as eight years older than he was. I didn’t search for that wide of an age difference.

Looking at the manifest for the ship, Friedrich der Grosse, which arrived in New York on January 11, 1911,  I’m able to find my grandfather’s name on line #8. Why this ship did not come up in my original search for any name sounds like “Gartz” (and even when I searched for “Gortz” the program didn’t find him) is not clear. What is clear is that #8 on this manifest is my grandfather, Josef Gärtz: Age: 21 (corrected); occupation: carpenter; Nationality “German” Last permanent residence: “Kistorony” (the Hungarian name for Neppendorf); destination: Cleveland, including the address there of the friend who was to meet him, Gottfried Nuss.

I’m very grateful to Monika for her expertise and help in solving the mystery of the missing manifest, and to know now which ship Josef travelled on. I’ve corrected my previous posts to reflect the accurate information.

That is a wonderful find! There is no similarity between the Hungarian and the German name for the town. If I was doing the transcription, I would also have transcribed his age as 29.

BTW — my cousin, Martha, enjoyed your comments on the blog so much. Unfortunately, she emailed her comments directly to me instead of adding to the blog. She suffers from macular degeneration and it is difficult to even read the posts right now. Everything I send or receive is in 24 pt. type.

I’ve had problems with ship manifests. Often names were spelled incorrectly. You’ve done an amazing job, with Monika’s help, to get everything straightened out.

Linda,
Did you happen to notice that this post is in today’s geneabloggers newspaper? Here is the link. http://paper.li/geneabloggers/1289136158/~list?tag=%23genealogy

The ship “Kronprinz Wilhelm,” I think was mentioned in “Thunderstruck” by K. Larson (author of “The Devil in the White City”) as a ship that Marconni may have taken at that time to set up wireless stations between London and North America. Wireless communication between ships was in its infancy.

Linda,
Your acknowledgement of mistakes is special. We all make them and they slow us down. Thanks for sharing yours, in hope, that we will not make the same. But we probably will.

You’re becoming a real gumshoe on this project. Great post.