Race and change in 1960’s West Side Chicago

Well, the mystery of who bought the Young-Parker house has been solved. As more or less expected, the colored moved in today 6-22-63

This diary entry Mom wrote opens my upcoming book, Redlined, Race and Change in 1960’s Chicago (publish date April 3, 2018).  The event it recounts occurred at the height of the Civil Rights Movement, when clashes between whites and blacks was daily news.

That spring of 1963 was a violent and deadly one for African Americans. The peaceful Birmingham, Alabama, protests (The Birmingham Campaign) against racist Jim Crow Laws were met with brutality by Eugene “Bull” Connor, Birmingham’s Commissioner of Public “Safety.” (an oxymoron).

Images blasted across the nation’s (and the world’s) television screens:  high-powered fire hoses trained on teen protestors, who were rolled across streets and into fences; beatings of unarmed blacks, kids thrown into paddy wagons, still singing their protest songs. 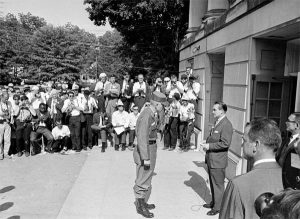 AL Governor, George Wallace 6/11/1963 at entrance to University of AL

In June that year, the governor of Alabama, George Wallace, stood in front of the entrance to the University of Alabama to prevent the enrollment of black students. “Segregation now, segregation tomorrow, segregation forever!” he had declared at his inaugural address a few months earlier. President Kennedy sent in federal troops to ensure the students’ entry, and Wallace had to back down.

That night, June 11, 1963, Kennedy called on the nation to treat its black citizens fairly.

The next day, in a vicious rejoinder, Medgar Evers, the field secretary for the NAACP, was gunned down in his driveway in front of his horrified wife and children.

This was the lead-up and backdrop to the first blacks moving onto our block. Yet it was the whites who were frightened in my neighborhood by the arrival of this African American family.

Why were whites frightened? Why in so many Chicago neighborhoods did whites react violently, often rioting, when blacks moved nearby?

“Every place they’ve taken over, they’ve turned into a slum,” declared one white protestor in 1953, who objected to blacks moving into her South Deering neighborhood on Chicago’s South Side.

But the real culprit was the racist lending policies, causing neighborhood deterioration after blacks entered.*

Starting in the 1930s, the FHA, Home Owners Loan Corporation (HOLC), and other government agencies created a neighborhood rating system. Neighborhoods were given codes: A, B, C, D. 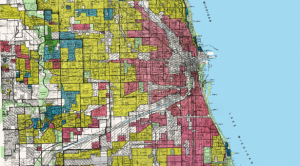 A HOLC redlining map of Chicago

A was the best – and outlined in green. A good investment for mortgage lending. D was colored red – “redlined,” and virtually no mortgages were available. That meant blacks couldn’t invest in homes. They couldn’t get loans to repair their homes, and often overpaid for homes already in disrepair.

For whites, it meant that they couldn’t sell their homes, except to unscrupulous real estate agents who paid them under value, then turned around and sold to blacks “on contract” at inflated prices.

“Contract’ selling meant that the buyers didn’t gain title, but paid monthly installments toward their debt. If they missed even one payment, they lost the house and all they had already paid.

But most whites didn’t know about the insidious practice of redlining (I’m sure my parents didn’t. Neither the word nor concept ever was mentioned).

So when blacks moved in, whites wanted out – to get as much for their property as they could before the offered price continued to plummet. It was a reality that played out in large cities across America. (See the excellent Atlantic article:  The Racist Housing Policy that Made Your Neighborhood)

The effect was to change my parents’ lives in ways they never could have predicted.

Please keep watching on Thursdays for sneak previews of my upcoming book, Redlined, Race and Change in 1960’s Chicago.

*Quote from As Long as They Don’t Move Next Door, by Stephan Grand Meyer. page 120

You’ll be among the first to know! Sorry for late reply. Some comments are just showing up.