Before Oprah spoke the name, “Recy Taylor” at the Golden Globe Awards on January 7th, most people hadn’t heard of Mrs. Taylor, even though a new documentary, “The Rape of Recy Taylor,” a film by Nancy Buirski, had been released on December 7th, just a month before Oprah’s speech. 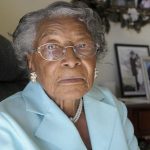 Mrs. Recy Taylor at the time of her interview for the film, The Rape of Recy Taylor.

It was news of the documentary that brought her name to my attention, but I was thrilled that Mrs. Taylor and her story (and the stories of other black women who had spoken out) were sent out to the world by Oprah’s commanding speech.

I’m writing about Mrs. Taylor today because it’s so close to the anniversary of the final injustice she had to face. That anniversary fell yesterday, Valentine’s Day, the day we celebrate love between men and women who choose to be intimate.

Taylor had been gang-raped in 1944, but it was on Valentine’s day, 1945, that the the final bitter pill was delivered. Seventy-three years ago, an all white, all male grand jury refused to indict any of the six white men who had gang-raped Taylor in Abbeville, Alabama.

I can picture her, seventy-three years ago today, still feeling the crushing disbelief, that her rapists would never even stand trial. But in 1945, blacks had come to expect injustice in America. Whites had lynched thousands of young black men; white men could rape black women with impunity. 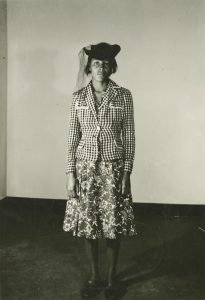 The redlining maps that color-coded cities across the country, prevented African Americans from investing in property. These maps were legal from from 1933-1968, when the Fair Housing Act was passed. But redlining continued in a variety of underhanded ways. Today, the typical black family has about 6% the wealth of the typical white family because of these practices. (Read “The Widening Racial Wealth Divide,” from The New Yorker.)

In a trailer for the film (see it here), you can hear Taylor herself, an old woman now in the film, describing what happened to her. The trailer alone is enough to send a shiver across your skin. The film was released on December 27, 2017, three weeks before Oprah’s speech.

Yesterday I posted about the love between my parents as expressed in a sweet Valentine card my mom sent to my dad – and a postcard my grandfather sent to his sweetheart, my future grandmother. Recy Taylor’s Valentine’s gift was the knowledge that the six men who had brutally raped her would never even be indicted.

At least she knew her story would be told in the documentary Buirski. If only she could have lived a few weeks longer, she would have heard herself honored by the most powerful woman in America – and her story become a rallying cry for women to speak out loud: #MeToo!