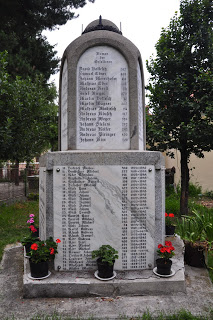 Travel Tuesday – Monument to the dead

Sam Ebner, Lisi’s brother, died in the Battle of Galicia, one of the earliest battles in WWI. (See previous two posts: The Fallen-Part I and The Fallen-Part II). I wrote about my brothers and my 2007 visit to my grandmother’s (Lisi’s) church courtyard in her hometown of Grosspold, where we discovered this monument inscribed with “Our Fallen Heroes.” Lisi’s brother’s name, Samuel Ebner, was carved near the top.

But it wasn’t until I was able to decipher several letters from Lisi’s father (also Samuel) back home in Grosspold, that I realized Lisi’s direct connection to and partial responsibility for this memorial honoring her brother and other fallen soldiers of “The Great War,” as it was known.

Here are two letters Samuel Ebner, the father, wrote to Lisi and Josef. The first is undated, but the content and date on the second make it pretty clear that both are from 1936.

I must ask you for 100 Lei by March. At that time, a memorial for the fallen soldiers [of World War I] will be erected in the church courtyard and on this monument, the names of the dead will be written in gold letters. So I want to make this little request for 100 Lei* to be given for Sam.

I’m late writing because of…the memorial to our heroes who were laid to rest in foreign ground. The Memorial stands in the Church courtyard. I paid with the money from you, and your name was inscribed.

But my grandparents had sent more than just the 100 Lei* for the monument—ten times more, in fact. The remainder of the letter shows just how much Lisi was helping her extended family during desperate times in 1936 Romania.

Dear Children,
I received the 1000 Lei, and I send you my deepest thanks for it. I have often said already that we are so lucky to have you. Other people say how nice it is when the children think about their parents.
Best thanks again, you Dear Ones, for the money. We have paid the taxes for 1936 and bought pigs for next year.

(*Lei has been the currency of Romania until recently. I don’t know what the exchange rate in 1936 would have been, but I do know it was in the depths of the Great Depression. Not only were my grandparents trying to keep afloat in a dismal economy, they were financing a memorial and family 5,000 miles away)

Although separated by thousands of miles and away from her home town for twenty-five years, Lisi maintained strong ties to her homeland. One hundred years after she and Josef emigrated from Siebenbürgen/Transylvania, we can still see today the visible impact they made on a land their hearts had never left behind.

Hi. I read every post on this blog and I am enjoying it very much. You’re such a gifted writer. It’s as if participating somehow in the lives of the people you describe. I am looking forward for the next episode of their story.

I love your blog and writing. It is such an emotional journey for me, also the daughter and grand-daughter of several family members who left their beloved homes to travel to America. Thank you!

Thank you for these lovely comments. It’s embarrassing that I had not seen these comments until today. I’ve just published a new book – and you can find out all about it on my website, which you should get a link to with this reply. If not, go to http://www.LindaGartz.com and please send me a message or email as to how you’re doing. I have a different focus, but it was all inspired by the archives. Thanks again.