On Jan. 11th, 1911, (1/1/11) a massive steamship named “Friedrich der Grosse” (for Frederick the Great, a one-time Prussian ruler) pulled into New York Bay. My dad’s father, Josef Gärtz, was on that ship, peering out at the Statue of Liberty greeting him and the other incoming boat-load of immigrants.

A rough sea crossing in winter

It had been a grueling eleven-day ocean-crossing in winter, the ship pitching and yawing in constant storms. My grandfather wrote little about his time on the ship, but did write this in his diary:
The first and second days were fine, but the other ten days we had very stormy weather so that not a single person remained healthy or found any joy or pleasure on the ship. The ship flew up, then down, and made us completely dizzy. I was only sick the first two days, [I think he means the first two days of stormy weather], and then I got used to the ship’s movements. Still, to travel over the water in winter is gruesome. The weather was so stormy that we could only see 80, 100 meters at the most, and the water flew about.

Josef wrote this about food on the ship:

Another problem on the ship was eating. As long as I had mother’s bread and wurst, it was ok, but when I had eaten all that, I just stood there and didn’t know how to get something to eat because the cost [of food] is miserable on the ship.

It’s likely that Josef was hungry the entire trip because he had very little money. He used to tell us when he first was making his way in America, he would buy a loaf of bread and a salami, and portion it out over a week. No wonder he was so skinny!

A special arrival date—NUMBER ONE for every digit 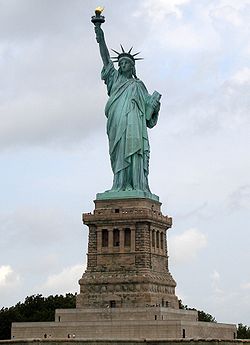 The day Josef arrived, the date is auspiciously made up of only the digit one: 1/11/11, as if his chosen path is the number-one turning point of his life. He must have felt over-the-moon joy that he had finally reached his destination.

I would like to have learned more about how he felt upon seeing the Statue of Liberty, pulling into the port of New York, and enduring more health inspections at Ellis Island. But then I’m grateful to have the records he did make—and that have been amazingly preserved for this past century.

My guess is that he didn’t record his first impressions because he was too excited and overwhelmed upon landing to be scribbling in his diary. So without his words to guide me, I’m going to try to briefly reconstruct what he, and all of of us with European ancestors who entered through Ellis Island, probably endured as initiation into this new land. Ellis Island is where Josef Gärtz lost the umlaut over the “ä” and became Gartz.

Let’s join Josef as he disembarks from his ship, Friedrich der Grosse on January 11, 1911, and get just a little flavor of our ancestors’ arrival. 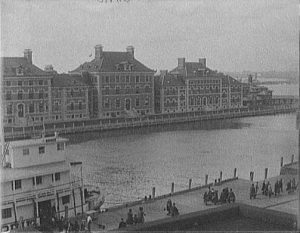 Passengers disembarking from barge at Ellis Island ~1910 From Library of Congress collection.

After passing the Statue of Liberty in New York Harbor, steerage passengers (undoubtedly how Josef traveled—the cheapest) are loaded onto barges, transferring them to Ellis Island, where they will undergo a number of inspections before being admitted to the United States.

In many ways, Josef is typical of the immigrants arriving at this time. Like Josef, most of them (68-90%) fall between the ages of 14–44. He is 21. About half of the men in this age group are single, like Josef. But his skills aren’t typical: about one fourth of the immigrants, the largest percentage, are common laborers,” while about 15% are “skilled laborers.” As a master carpenter, Josef belongs to the latter group. That probably bodes well for finding decent work. The others are primarily farm laborers or servants. Only one percent describe themselves as “professionals.” 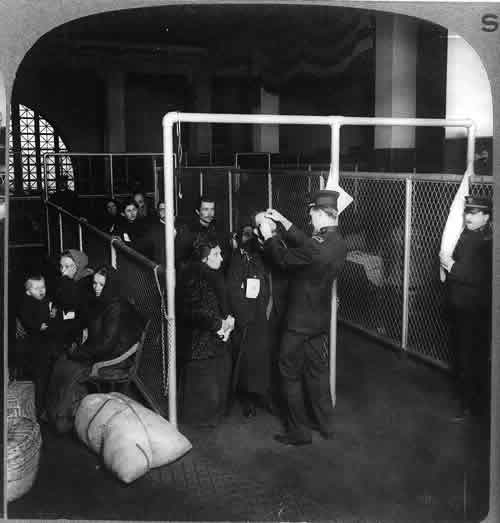 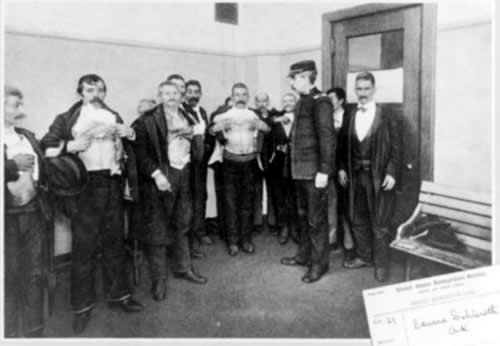 After all the health inspections, inoculations, and eye examinations, Josef has already endured before arriving in America, he, and everyone else, is once again subjected to prodding, peering, and poking, and all are further questioned as to their ability to support themselves. Failing these tests ends the dream.

It has to be nerve-wracking to wait in these endless lines, to wonder if some small oversight will send you back across the ocean. But all goes well. Josef overcomes the final hurdle and enters the United States of America. I can only imagine the elation and anticipation. (I’d love to hear from any of you, dear readers, who has a note, a diary or a memorable story passed down as to what  an ancestor’s first emotions were upon realizing he/she was actually starting a new life in America.)

Next stop: Cleveland, Ohio, where a “Landsman” (another Siebenbürgen/Transylvanian German, from near his home town)  will welcome him into his home, help him get on his feet, and teach him the ropes of America. So it was with so many who sought out friends and relatives from the “Old Country” who could ease their way into the “New Country.”

I’ll be occasionally updating what happens to Josef and of his continued wooing of his sweetheart, Lisi, from 5,000 miles distant in between more present-day posts. Thank you for reading. Please comment on anything from your own family’s experiences to what you think about Josef’s journey.

Note, except where noted otherwise, the Ellis Island facts and photos included here come from this site: Gjenvik-Gjønvik Archives. The site provides footnotes at the end of its pages.

This post is a combination parts of two posts, originally published on Jan. 5, 2011 and Jan. 11, 2011, the latter on the 100th anniversary of Josef arriving in America.