“…district threatened with Negro encroachment” is a direct quote from the portion shown here of a 1940 map of Chicago area neighborhoods, illustrating the color grade given to various areas by the New Deal’s creation, the Home Owners’ Loan Corporation (HOLC).

Note: Click here to find out the color-codes for your neighborhood in 1940.

In the 1930s when it was created, HOLC was popular in the midst of an economic crisis (the Great Depression). It provided billions of dollars for the rescue of banks, thrifts, and distressed homeowners.

But that rescue came at a big price to African Americans who were cut out of getting mortgages because areas where they lived were automatically “redlined.” That also meant that whites were terrified of blacks moving into their communities, knowing that the arrival of blacks surely meant decline in the whites’ property values.

Of course HOLC declared no mortgages should be given in those areas. Without mortgage availability, whites would have to sell to unscrupulous real estate agents who used racist fears to get them to give up their property cheap and fast.

My parents bought their first home, the two-flat in which I grew up, in the 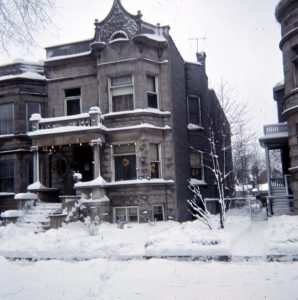 West Garfield Park community nine years after this map was made. The 1940 map shows that ten years before they purchased the building, our area was already colored “yellow,” meaning “Definitely Declining.” 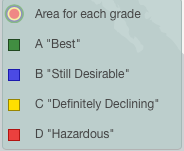 Would they have bought in a “Definitely Declining” neighborhood had they known of this color-coding? If they had known that a threatened area created a red wedge just a few blocks north of where my family lived on Washington, would they have continued with the sale? (Our house was on the street directly above the farthest left X marks)?

Few people had any knowledge of these maps (the very existence of these racist maps was first exposed in 1938 by a white “whistle-blower” with the FHA. You can read about why creating these maps was rather secretive and how the process came to light here.)

My parents put years and thousands of hours of sweat equity plus real money into improving their building, thinking they were creating a solid financial future. But it would all be undermined by these racist mortgage policies.

In my book I write about the visceral fear that whites felt when they thought blacks were “encroaching:”

On August 1, 1959, a house deep into West Garfield Park was sold to an African American family–on Jackson Boulevard, a couple blocks south and west of our home. Before the black family moved in, a mob of more than 1,000 outraged whites, some throwing stones and bricks, gathered outside the building. The Chicago Police Department dispatched hundreds of officers to the scene, arresting more than two dozen people. For several weeks, police kept a visible presence in the area, an unusually robust response to white intimidation of blacks integrating a Chicago neighborhood.

An NAACP memo documented that between 1949 and 1951, three bombings, ten actual cases–and eleven attempted–incidents of arson, and “at least eighty-one other incidents of terrorism or intimidation” were perpetrated against blacks.

The HOLC color-coded maps may have helped white America come out of the Depression, but its legacy of racism, called out recently by Ta-Nahesi Coates in his Atlantic Magazine articles, the just-published book by Richard Rothstein, The Color of Law, Amanda Seligman’s Block by Block, and Beryl Satter’s, Family Properties.

These are just a few of the writers I’ve turned to in order to get the story straight in my book. There are so many others that will pop up on Amazon if you look for any of these.

Did you click on the link above to find out if your neighborhood was color-coded? What did you find out? Does this help explain racial change in your community? Does it make you rethink any previous feelings you had about that change?

Special thanks to the four universities and scores of people who made possible the digitization of this material available online.

Thank you to Amanda Seligman, @AmandaSeligman, chair of the history department at University of Wisconsin, Milwaukee, for sending me this link.