Threats to the Dream—Vienna to Bremen 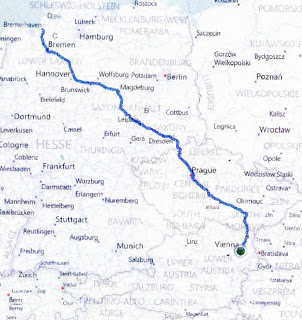 Josef wrote both in his diary and to Lisi about his terror atop the train from Pressburg (Bratislava) to Vienna, one corroborating the other, but each using slightly different language. In the diary he wrote:
I thought the sharp wind would throw me under the fast train like a piece of paper, but I held tight until we were in Austria. Then I came back down into the car and was very happy, but also distressed because my colleagues weren’t there, and it was very much fun to travel as a threesome.
In his letter to Lisi about this moment, he was more emotional and wrote: Oh, no! My colleagues had disappeared, and I stood crying in Vienna. Nevertheless, I pulled together some fresh courage and waited two days in Vienna, thinking perhaps my friends would come, but it was in vain. I had to set out further alone. [For an update on what happened to Josef’s colleagues, Johann Rastel and Andrea Lichteneker, see the end of this piece.]
Josef must have arrived in Vienna, late December 26th or early December 27th because he wrote:
I departed Vienna Wednesday evening [December 28, 1910] at 10 pm. On Thursday [December 29, 1910] at 11:00 am, I arrived at the German border, where it got dicey again. There the border officer asked me how old I was. I answered 24 years [he was only 21]. Then he asked for my passport. I said, ‘Immediately, Sir. My passport is in my suitcase.
I used that brief moment to step off the train and remained standing there until he went into the other car. I came inside again and laughed from heartfelt joy at my second clever ruse.Making it successfully across the German border reduced the possibility of Josef being sent back to Transylvania, but more threats to his dream of America still lay ahead.

Beginning in the late 19th century, the United States had pressured European countries to require increasingly stringent medical exams for emigrants before they even boarded a ship to America. A sure-fire way to be left behind was a diagnosis of trachoma, pink eye, highly contagious and, in those days, incurable. Sure enough, the medical exams begin well before getting to the port city of Bremen.

The trip continued to Leipzig where we got out and had a medical examination by an eye specialist. From there we traveled directly to Bremen. We arrived in Bremen on Friday [December 30, 1910] at 9 a.m.

It was from Bremen he wrote the letter to Lisi from which I’ve been quoting portions. How he began that letter and what happened after its completion will be published December 31, 2o1o. He, along with hundreds of others, still had hurdles to jump before boarding the ship to America.

New Year’s Eve in 1910 ushered in a new year with a completely unknown and uncharted future for Josef’s—and therefore, Lisi’s—life.

Hi, I am the owner of the blog of photography http://photographymc.blogspot.com/

I have added your blog in my favorite, your blog is really beautiful and useful compliments 😉

Tell me what do you think.

I’m so glad you like the blog! I have visited your photography site which is just great!