True love: The first man I’d like to marry…

Reading my Mom’s 1941 diary entries of dating my dad is like listening in on a BFF conversation. In my upcoming book, Redlined,  I had to streamline my parents’ romance–so I could get to the meat of the story of my Chicago neighborhood. But Mom’s vivid recollection of her evening with “Fred Gartz” is worth lingering over.

Mom had pondered to her diary in February 1941, whether or not Fred Gartz, whom she’d met November 19, 1940, would call her. She clearly liked him from the start. Then nearly three months passed from her February 1941 musings (“My biggest concern is whether Fred Gartz will phone to ask me for a date“) to another chance meeting with Fred. 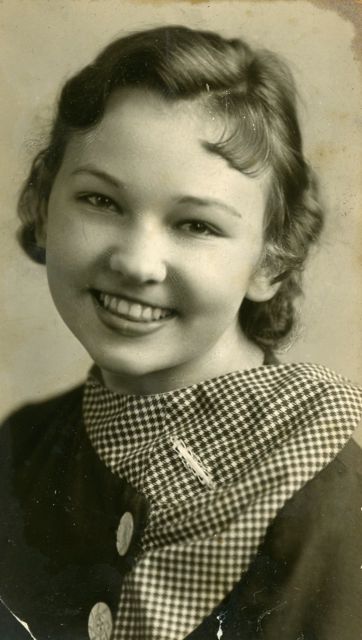 A bit of character background:  Esther Schultz, mentioned here in Lil’s diary, was Dad’s “buddy,” not really a girlfriend, which explains her generous sharing of Fred at this dance. She became a life-long friend of the family. Here’s Lil’s next diary entry on the subject of “Fred Gartz.”

Well of all things—I just returned from a dance…at the Moose Hall, 130 N. Dearborn, and by a curious coincidence this diary entry is again caused by meeting Fred Gartz again.
There’s no doubt about it; I’m in love with him after meeting him thrice. He was at the dance with his two brothers and some other friends, each with a girl friend. However, shortly after he saw me there (Fred) he asked me to dance, and we had quite a few numbers together. The first time I met him, (Nov. 19, 1940), I taught him the Polish hop and tonight I taught him the Rhumba. He catches on to all dances miraculously fast. We have so much fun together.

He’s really the first man I’ve met that I think I’d like to marry—intelligent, crazy, fun, and we have no end of things to talk about. In fact, when he first came to me this evening, we started to talk and had so much fun together and were so engrossed, we didn’t even start to dance immediately.

He apparently goes out with quite a number of girls, and this one, viz., Esther Schultz liked me very well and kept urging Fred to dance with me so that she could watch us. I sat at their table practically all evening and we all had a beer and sandwich together. 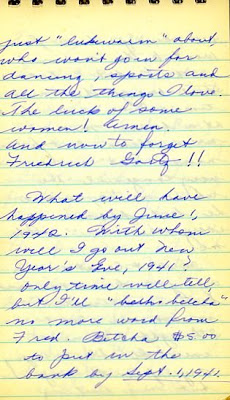 Hell, I have the worst luck, though. The previous time I met him we seemed to have such a wonderful time too — and not a phone call from him.

So difficult as it might be, I might just as well put him out of my mind once and for all because he undoubtedly will not call me up and I’m just crazy about him! I’ll probably be a “business woman” all my life or else marry just “lukewarm-about,” who won’t go in for dancing, sports, and all the things I love. The luck of some women! Amen.   And now to forget Friedrich Gartz!!

Just when will Fred get a clue and ask Lil out!

Note: This is a re-working of a previous post from Family Archaeologist re-purposed for this blog.

It’s such a gift to have–and share–these precious memories of your boy-crazy mom before marriage, kids, and hard times intervened. Thanks for letting us in on your parents’ new love…which encourages us to recall and relive our own.

Thank you for your lovely comment, Adrienne. My reply is so late – I have to get used to checking frequently as I don’t get a notice that someone commented. I’ll send you an email now.

Such a fun read!! So interesting we look back and see the same angst I think we all have had! Can’t wait for your book.

Thanks, Mary. Sorry for the long wait for a reply. I really appreciate your comments! Can’t wait to share more with you!

Thanks, Mary! So glad you liked it. I was out of the country when you wrote, and missed your comment. Thanks so much for your interest in my book. Getting closer!