In honor of Veterans Day I posted yesterday an essay about my uncle Frank Ebner Gartz, a World War II navigator.  Today I’d like to post about a tribute to a family member who lost his life in World War I. 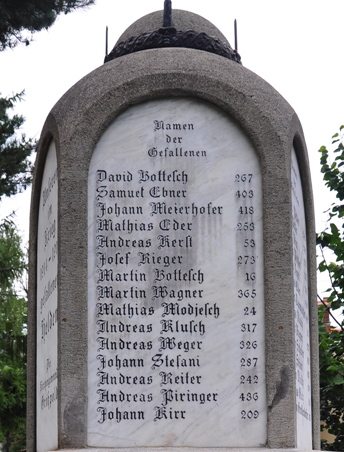 “Namen der Gefallenen” Names of the fallen, A memorial in Grosspold, Romania

My two brothers and I discovered this monument to the fallen soldiers in World Wars I and II in the courtyard of my grandmother, Lisi’s, home church in Grosspold, Romania. Samuel’s name was listed second from the top of the World War I “fallen.” 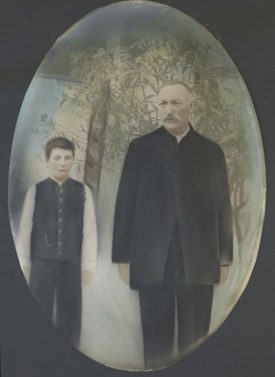 We didn’t know much about young Samuel (also my great-grandfather’s name), but this photograph, at left, always hung in a prominent place in my grandparents’ home and now hangs  as part of a 100-photo family history wall extending up the wall along my front stairway.  It’s the two Samuels: father and son.   Hand-colored with pastels, the photo was made about 1902-05.

Once I was able to decipher some of the letters my grandmother had saved, I came across a very special one– this postcard from her brother, Sam, addressed to his father, dated August 19, 1914. Samuel (who must have been nicknamed “Kaspar,” perhaps to avoid confusion with his dad) writes only the briefest of messages: 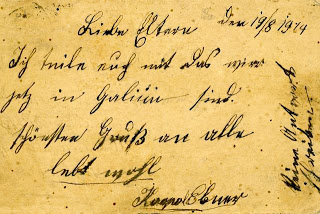 I share with you that we are now in Galicia. Most beautiful greeting to all. Farewell.

On the right side he’d added: Don’t answer [this letter].
Perhaps he didn’t know where he’d be. Perhaps he knew what a terrible battle he was about to enter. The day before young Samuel wrote this card, on August 18, 1914, the Russians had invaded Galicia from the east, in one of the earliest battles of World War I. The Russian army would eventually devastate the Austro-Hungarian Army in which Samuel was soldier. He died during the Battle of Galicia on August 26, 1914, just eight days after penning his last words.

His birth and death dates (latter barely legible above) were entered into the Family Book from the Evangelische Lutheran church in Grosspold. It shows he was born June 16, 1893. He was twenty-one when he died.

At some point, my grandmother’s half-brother, Hans, sent her the above postcard, adding this heart-felt note on the address side:

I’m sending you here the most valuable thing I’ve ever had–because it is the last writing from our dear brother, Sam–in the hope that you will treasure it as I have.
Hans

The fact that I still have this postcard, almost 100 years later, is testimony to the care my grandmother took with this precious last message.

But not only did she save her brother’s memory in this modest missive, she helped make possible the impressive memorial whereon were inscribed her brother’s and his fellow fallen comrades’ names.  I later discovered in notes she had saved that she and my grandfather had contributed money to make the memorial on this page possible.

Just as they honored their beloved family member, this Veterans Day I’d like to honor all soldiers who’ve lost their lives in the terrible wars we’ve waged and those who continue to sacrifice their lives, even as I write this.