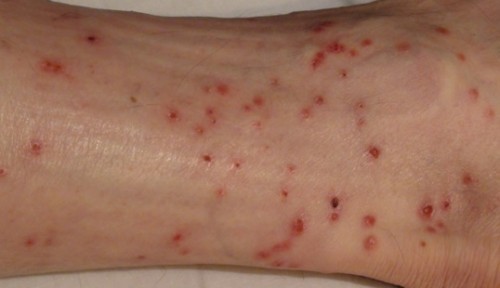 Chigger bites, like Frank suffered from. Super itchy and painful.

Ticks and chiggers combine with a flunked test to make this twenty-year-old Air Corps Navigation student pretty miserable. I suffered from scores of chigger bites when visiting San Antonio when I was about Frank’s age. I could not stop scratching for days and sleep was impossible from the itching madness. I totally empathize with what my uncle went through.

This is the first letter he’s written indicating concern about his class work, and he still worries about his Dad’s knee. He wrote a similar update to my parents, with this added detail:

While on bivouac I got the record number of tick bites and I feel lousy. The most sleep I get in one night is 4 or 5 hours. They have been driving me nuts.

I’ve neglected to write this week as I haven’t been feeling too good. I told you we were going to go on bivouac this week—well I got bit up something awful by ticks and chiggers and have been missing plenty of sleep scratching the bites. They are getting better now but I had a bad time for a while. They were all over my back end and around my belt, under my arms, behind my knees and elbows, around my ankles and they were pretty bad. I couldn’t sleep at first but found some relief with some medicine I got at the dispensary. I’m on the road to recovery now but at times last week I wished I were dead.

How is Dad’s knee getting along? I’ve got a feeling that it’s going to be O.K. soon if he takes it easy and Mom it’s up to you and Will to see that he does. The hell with the work. It will wait.  The knee can’t.

I sent a package to Fred today and he will get it about Thursday. I sent it railway express. I want him to have most of it but I put a note in it to give you some folders (picture) and a pennant I picked up. I’ll write him a letter as soon as I finish this one and tell him what to do with the stuff. Also there are a few things for Will in the package—2 Log magazines—the official navigation magazine. I’m sure he will enjoy looking at it. Also there’s some airplane recognition books I’m sure he will use.

I flunked the weekly examination this week and it’s because I missed a day’s school while I was working on the camouflage demonstration and from loss of sleep. I’ll be O.K. again this week. I got my first good night’s sleep last night and I feel like $100 today.

We will fly tomorrow so I hope the weather will be good. I’m going to stop writing now. I have a lot of letters to write and not too much time to do it.

Till I write again I’m always your 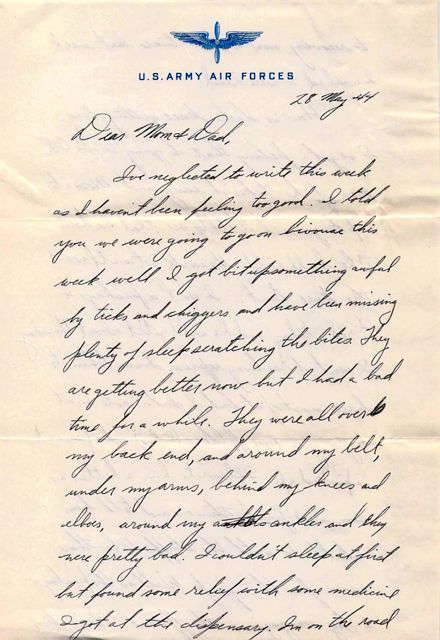 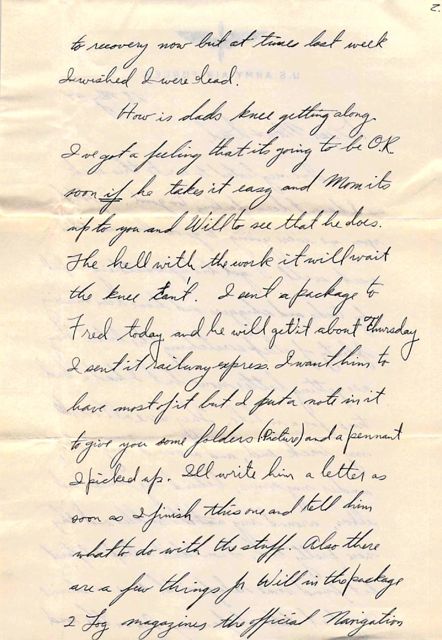 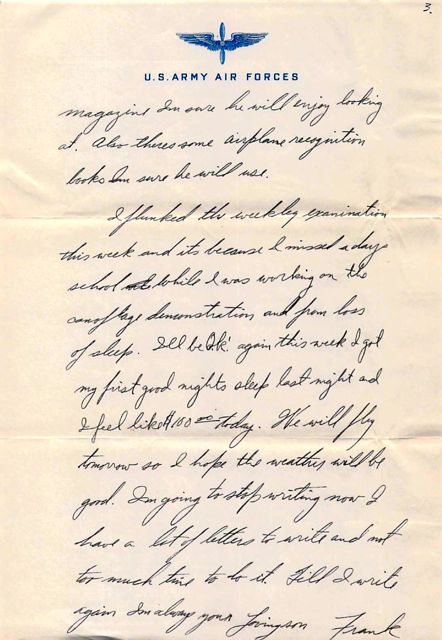