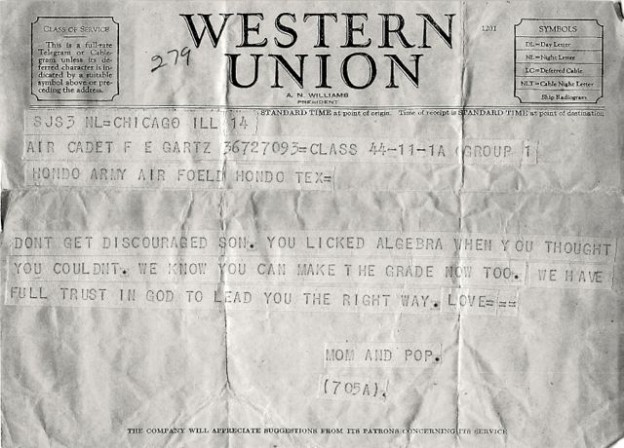 Telegram encouraging Frank in his studies

In Frank’s last letter home, dated June 11th, he expressed fear about his course work. No matter how hard he studied, he was failing tests. He wrote: “I can’t write letters or eat right now because…it’s a constant threat to my existence.” In World War II, the fear of “washing out” from the Air Corps, a common occurrence, and being sent to the infantry, plagued every young cadet.

His family immediately rallied behind him to bolster his confidence with love and encouragement. The telegram that is featured on this post, sent from his mom and dad on June 13th, immediately after receiving Frank’s letter, is below. I’ll write in all caps, as the telegram was written:

DON’T GET DISCOURAGED SON. YOU LICKED ALGEBRA WHEN YOU THOUGHT YOU COULDN’T. WE KNOW YOU CAN MAKE THE GRADE NOW TOO. WE HAVE FULL TRUST IN GOD TO LEAD YOU THE RIGHT WAY. LOVE ===

The letters below arrived from both brothers too, to bolster Frank’s confidence. You’ll notice a markedly different approach between Will’s letter and that of my Dad, Fred, but both had the best intentions — to help their little brother keep going.

These letters are just the latest evidence of a family that pulled together in tough times. When my grandfather’s knee became infected, and he couldn’t climb stairs, my Dad, a chemist, and his brother, an engineer, dove right in, hauling coal and taking down the trash to help my grandmother, who was getting by on four hours sleep a night as she tried to do her “woman’s work” and her husband’s care for up to 65 apartments. (See: Winter toil takes toll and Homefront update (4th paragraph) for a vivid view of a time when no social “safety” nets existed.)

First, from my Dad. I’m only including the part that pertains to Frank’s course work as it’s a very long letter.

I have a few minutes tonight for myself here at work so kinda thought I’d drop you a line. I hear you have been having some difficulties in your studies. Could it be that you “try too hard?” I’m not being sarcastic but actually mean it. A person can try so hard that, like cramming, it fails to make an impression that is a lasting one. Could it be that you over-emphasize the wrong points or perhaps just don’t give enough time to the weak spots? When I had my course in teaching at Lewis and when I had that practice teaching of chemistry at Crane there was a principle of over learning very strongly emphasized.

A person may sit down and learn something or memorize something perfect in about 1 hr. He may retain this shall we say from 8-10 days (this is just an estimation). However if you broke that hour into two ½ hour periods and in the 2nd ½ hour try to “over learn” what he remembered from his 1st ½ hour period, then he may retain it not 8-10 days but rather 12-14 and so on.

Now this may or may not be your problem at all. If it is and you can use it give it a whirl. We are all for you in our thoughts and hopes and prayers no matter what happens, only remember this. Even though you are in the Army and away from civilian life, you still are having an opportunity that you may never get again in civilian life. The education that you are getting at the government’s expense is and will be very valuable to you in the future.

I suppose it is trite for me to say that you should try to do the work faster for if you didn’t try, you wouldn’t have known, but remember, speed and accuracy are essential prerequisites of a navigator for a crew has greatest faith in a navigator who can give a quick and accurate answer as to this position.

LETTER TO BE CONTINUED IN FUTURE POSTING

From oldest brother, Will:

We received your latest letter and I’m surprised at your discouragement. Don’t let it get you down – just think – that fellow and that fellow has done it. So can I.

There are a lot of tricks and shortcuts that can be learned so let’s have the dope on what passed as you have your troubles in solving your problems. Is it the graphical solution or is it computer work? In any case if you are free to discuss same with me maybe by a few quick letters we can swing you right. This is supposing that I can help you for it may be your work is far above my plane of knowledge. In any case we may be able to do something with all the sources of information I can dig up.

Double drift problems to determine the wind direction and velocity should be easy. Alternate airport or base problems shouldn’t offer too much opposition. Interception problems and celestial navigation may present a little difficulty but from what I hear they too should and could be made easy.

Portion of Fred’s letter below; then Will’s 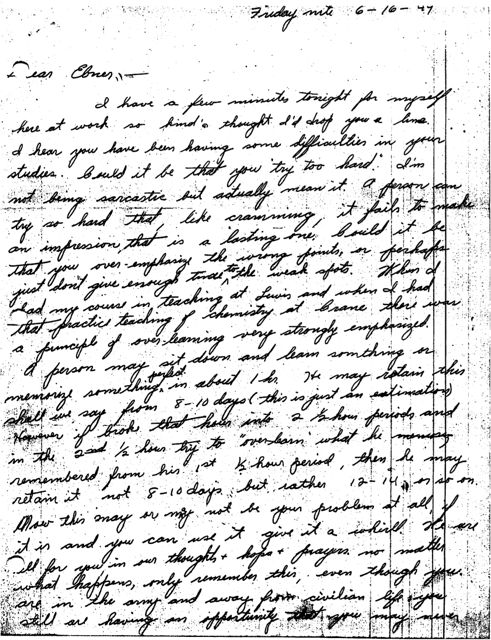 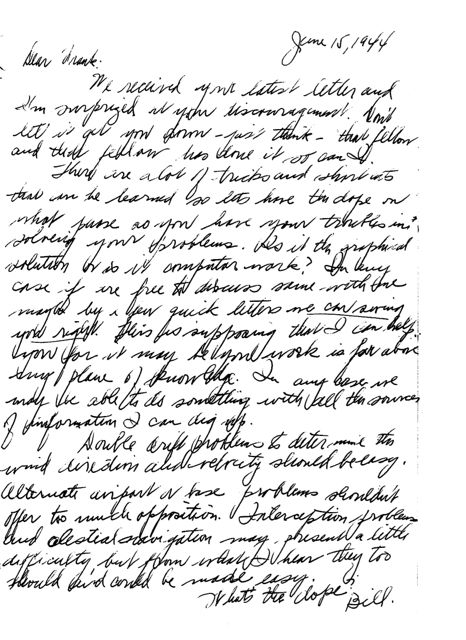