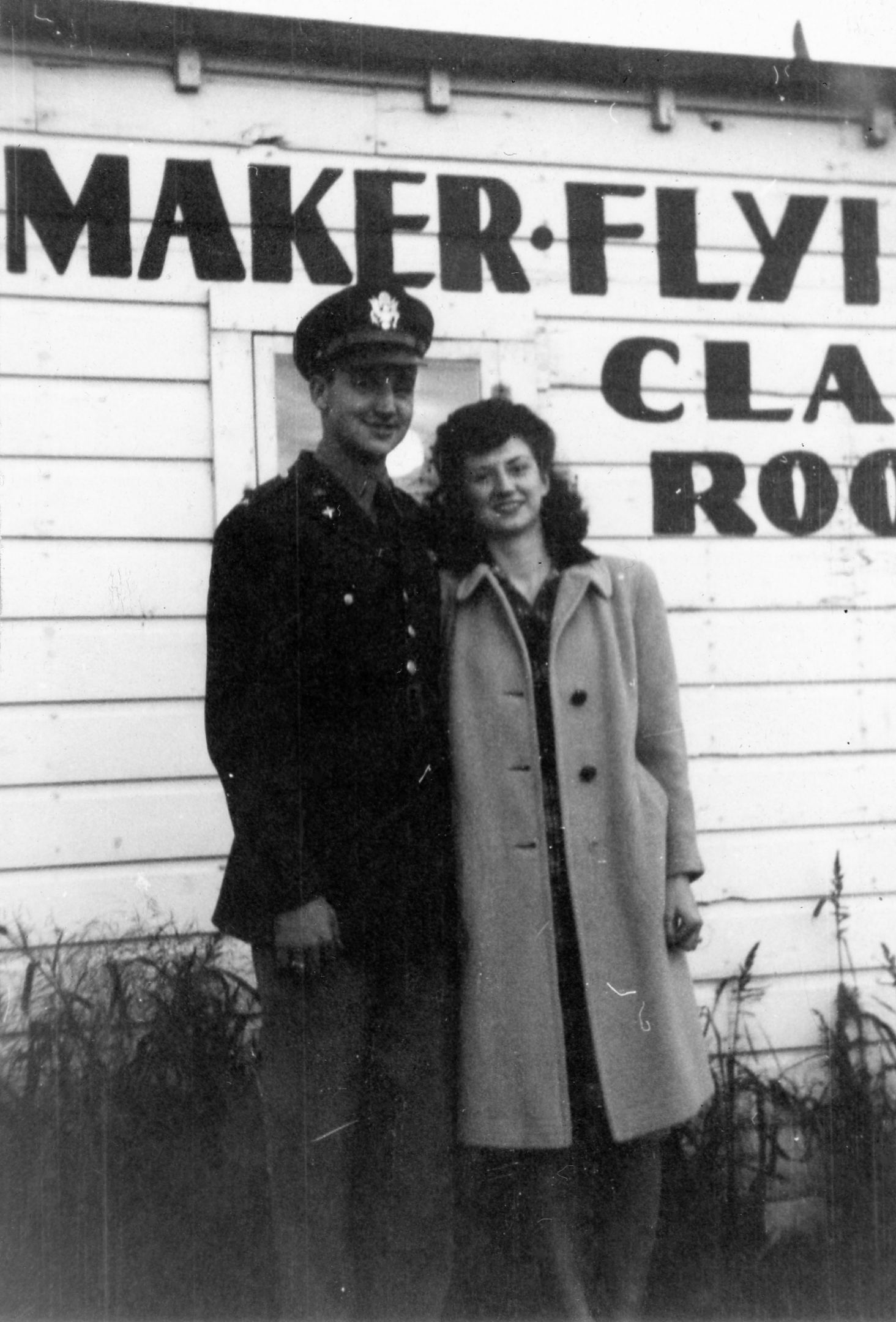 Hello again, World War II Airman Letters fans. I’m very sorry that this blog had such a long silence. I was suddenly faced with an unpleasant health issue last June 2014 and had to drop all extraneous work.

This post will summarize what happened to Ebner after he graduated from Navigation School in Hondo, Texas, in September 1944 (photo shows him and his girlfriend at his graduation) and eventually was shipped overseas to put his intense training into navigating bombing missions to bring World War II to an end.

I’ll be quoting from the letters, but not including the entire letter, and I won’t be posting the original letters from now on. The final post about Ebner’s eventual fate will come after this one.

As a reminder, in a previous post, we saw Ebner petrified that he was in danger of “washing out” of Navigation School, “It’s a threat to my daily existence,” he had written. His family rallied around him with telegrams, letters, and lots of love and encouragement to bolster his confidence. He had pulled himself together, passed all his courses, and in September 1944, Frank was ready to graduate as a full-fledged navigator. (See “Family rallies behind discouraged World War II navigation cadet” to get the whole picture.)

It’s important to remember that Ebner, like virtually all of his crew members was young. They didn’t have the luxury of fraternity high jinks or time to become “emerging adults,” as we now refer to young people well into their late twenties. The young men faced life and death every day. Their ability to concentrate and do the serious work of winning a war on many fronts was their focus.

But they were also still “boys” at heart, and when they had a chance to be “just boys” they did so, as you’ll see in some of the following letters. 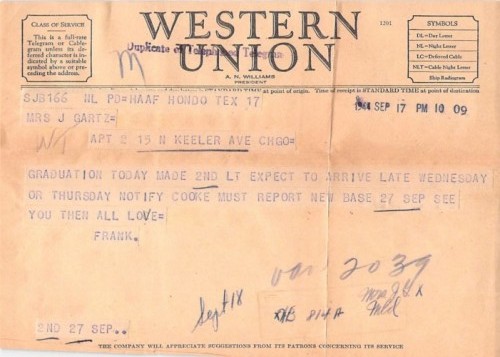 GRADUATION TODAY. MADE 2ND LT. MUST REPORT TO NEW BASE 27 SEP. SEE YOU THEN. ALL LOVE – FRANK

His sense of elation must have been high. Frank was next sent to Rapid City, South Dakota, to complete his training in the B-17 heavy bomber:

He wrote to my father, Fred, on October 12th:

We are going to fly tomorrow. It’s my first time in a 17. I have a good crew. The first pilot has his 1400 hours of flying and really knows his stuff. The co-pilot is a swell guy and so is the bombardier. The three of them are married so I have two rooms to myself in the B.O.Q. We have been going to class every day and celestial NaviTrainer (?) since I’ve been here, but it’s not too dull. I’ve learned quite a few things in those classes.”

His mother, my grandmother, wrote to Ebner two days later. (She wrote English with the accent and syntax of her native tongue, German)

Some times I wish I could fly to you and see what has happened to my Frank. I had a nightmare from worry, but thanks God it is all over. So God is very good to us and so to you as it comes closer to your test to lead your [B]-17 safely where your duty is given to you.

In Ebner’s next letter, he informs his family that he will soon be flying overseas. My father wrote him a heartfelt letter on Dec. 7, 1944. It’s clear how close they were. In fact, Ebner was my dad’s best friend.

My Dear Brother, There is so much pent up within me that I want to say to you and I don’t know how to get it out. You leaving us—not to see you for probably a long time. We have been together (all of us) for quite a while and despite little differences, our love for each other is truly without bounds. To me you are somewhat more than just a brother. You remember you and I were in the park day in and day out and even, when need be, I changed your diapers?

My dad continued with family reminiscences, and finishes with this:

I don’t know how to close this, except through Mom. Don’t forget what she taught us, irking as it may have been, it was and always is, based in love and sacrifice. She and Dad have given up everything for us—everything, and whatever you or Will or I might ever be, we owe it to them.

(Note: Dad reverted back to the first language all the Gartz sons learned from their Romania-born, but ethnic German parents.)

Dear Mom, I can’t tell you where I am or where I’m going, but the first leg of our trip is over and we are waiting for things to come out right so we can leave here.

On Christmas day, 1944 he wrote from Africa:

We haven’t reached our final destination,but I hope we soon will as this constant flying is getting all of us on edge. We have had good luck so far and I hope it will keep up….We had a nice Christmas dinner tonight with turkey, wine, and all—but the poor enlisted men had a bad deal. They had “C” type rations and they had a right to be as mad as they were.

Frank’s next letter arrived in January, 1945. The next post, October 12th,  will close this blog. I’ll publish a narrative essay  of Frank’s bombing missions, as part of the Second Bomb Group, stationed in Italy on the Adriatic Sea, and his eventual fate. I’ll include some pretty amazing photos of combat, his camp, and his crew in Amendola, Italy.